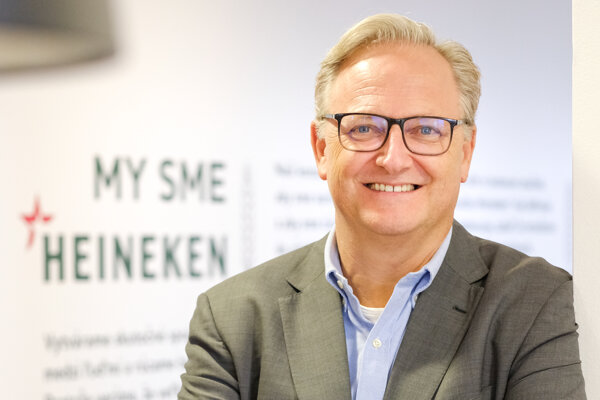 -Why Slovaks would not appreciate African beer

-How the popularity of craft beer affects the market

When Rene Kruijt returned to Slovakia after a 14-year stint in Africa and South America to become the managing director of Heineken Slovensko, he found a developed Slovak beer market along with consumers desiring new beer varieties and tastes. This shift is in line with beer drinking trends that have been changing across Europe and beyond.

The Slovak Spectator spoke with Kruijt about the latest beer trends, differences between the African and European beer markets as well as why the brewery has increased its focus on zero-alcohol beers.

The Slovak Spectator (TSS): What are the biggest differences between the beer markets in Africa and Europe?

Rene Kruijt (RK): If we let the average Slovak consumer taste most beers from Africa, they would probably not appreciate their taste profile as such. Beers here, as well as in South America, are much sweeter in taste and lighter. This is because of the hot climate. Most beers drunk here are 10 or 11 degrees maximum, they are of lager type, but produced either with sorghum or rice malt. These are quite easy to drink, which is perfect with the hot climate. Beers common in Europe, which are even 12, 14 or 16 degrees, are very bitter and just do not go very well with the climate.

TSS: Has the premiumisation trend arrived to the Slovak beer market?

RK: Yes. Like in other segments, Slovak consumers desire new varieties and tastes while they are willing to pay a bit more for such products. This results in value growing at a bigger pace than the volume. I see it as owing to the growing purchasing power as well as a general change of the consumer. They would like to have a choice in brands and types of beers.

TSS: What are the other trends on the Slovak beer market?

RK: I like to visit shops to see with my own eyes what is happening and I see whole sections dedicated to beer where you can find all types of beers from all over the world. Fourteen years ago, when I worked in Slovakia as sales and distribution director, this was unthinkable. At that time, there were just rows of crates with mostly lagers of 10 or 12 degrees and little bit of dark beer. That was all. Now consumers have a huge variety, which brings a lot of excitement to the beer segment. It is not always easy to manage this complexity, but for us as a brewing company these are fantastic and really interesting times.

TSS: Does the consumption of radlers and non-alcoholic beers increase to the detriment of regular beer consumption?