The observatory at Lomnický will hold an open door on July 27 and August 3. 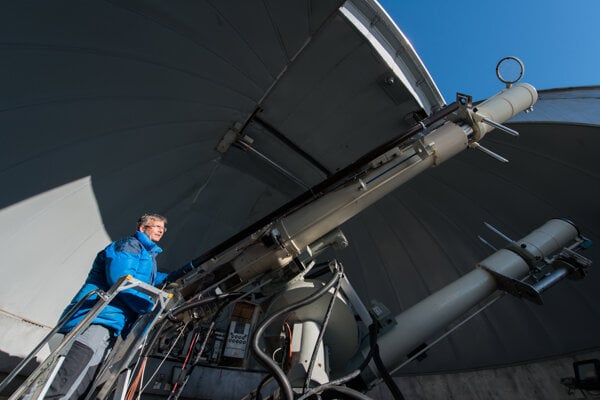 Astronomer Ján Rybák and the coronagraphs in the dome of the observatory at the Lomnický Štít peak. (Source: Jana Liptáková)
Font size:A-|A+63

“It seems that it’s worth it today,” says astronomer Ján Rybák with enthusiasm in his voice. He swiftly climbs the ladder to the dome of the observatory at Lomnický Štít Peak to check one of the two special telescopes pointing at the Sun.

He has been up since around 5 a.m. It is a brisk morning in late March, and the weather is just right for observing a solar prominence – a cloud of plasma above the Sun’s surface, which Rybák chose based on an earlier observation in Australia. The colour and the shape of the cloud depicted on the screen of the computer changes depending on the set wavelength.

Images of solar prominences (Source: Courtesy of the Astronomical Institute of SAV)

“Closer examination of these images not only helps solve basic questions raised by astronomers about the solar corona, but also may improve GPS navigation systems and reduce the prices of electricity transmission,” said Rybák, the head of this observatory.

Lomnický Štít is home to the observatory of the Astronomical Institute of the Slovak Academy of Sciences (SAV). At 2,634 metres above sea level, it is the highest workplace in Slovakia.

In 1957, Czechoslovakia joined the initiatives of the International Geophysical Year, aimed at global peaceful cooperation in science following the hotter part of the Cold War in the 1950s. Its plan was to build this observatory, whose construction took until 1962. Slovakia was preferred for the project over the Czech Republic, mainly because Czechia’s highest peak is Snežka, “only” at 1,603 metres, according to Rybák.

The facility at Lomnický is one of only three ground-based observatories worldwide, which systematically observe weak emission spectral lines of the solar corona – the other two are in Hawaii and the Caucasus.

The observatory shares the three-floor building at Lomnický with the Department of Space Physics of the Košice-based Institute of Experimental Physics. The latter runs a neutron monitor on the roof of the building, in order to observe cosmic rays. The SAV building is actually attached to the much larger upper station of the cable car with a meteorological station at its upper floor.

How to tune a coronograph

The observatory is equipped with two identical 200/3000 ZEISS coronagraphs – specially designed telescopes for the measurements of the very weak radiation coming from above the limb of the much brighter solar disk. They were installed in 1962 and 1970.

At the beginning, they made films for astronomers to develop photographs in the dark room for further examination. Some years ago, they were enhanced by tailor-made post-focus instruments – the Coronal Multi-Channel Polarimeter (CoMP-S) and Solar Chromospheric Detector (SCD).

“This upgrade enables us to obtain a type of data from the coronagraphs that they were not originally designed to provide,” said Rybák. The coronagraphs can now provide much more physical information than before. “We can also perform a parallel observation through both coronagraphs, which was impossible in the past.” 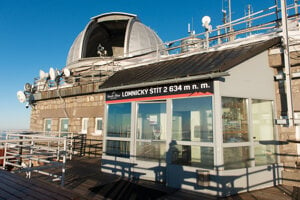 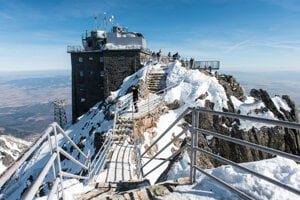 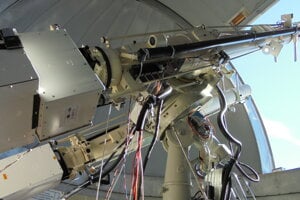 Now Rybák and his colleagues are tuning the high-level instruments to obtain as valuable output as possible. Nevertheless, both instruments have already provided scientific quality data. They were used to derive the results on the mass of prominences, i.e. relatively dense and cold clouds of plasma above the solar surface, and on the appearance of either real or just apparent tornadoes in the prominences.