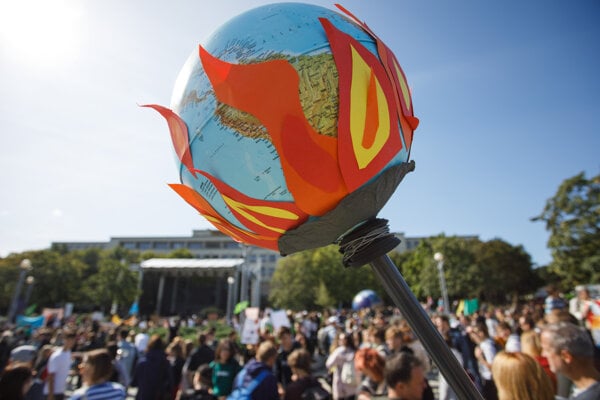 Climate change is not as emotionally charged as “discrimination against the little ones” which pro-life slogans demand must end. (Source: SITA)
Font size:A-|A+

Námestie Slobody, or Freedom Square, in central Bratislava, saw three big public gatherings over the third weekend in September: first, on Friday, was the climate strike, followed later the same day by another For a Decent Slovakia protest. Then on Sunday, tens of thousands squeezed into the square, framed by the buildings of the Slovak University of Technology, the Ministry of Transport and the Government Office, for the third major pro-life march co-organised by the Roman Catholic Church.

Yes, civil society is alive and well in Slovakia, with very diverse groups mobilising in support of their causes. The For a Decent Slovakia crowd has shrunk from tens of thousands at the height of the protests in 2018 to an estimated 5,000 on Friday, but they intend to keep their voices heard until at least next year’s parliamentary election (two more protests are planned before then).