Slovakia decided to reduce the generation of electricity from coal. 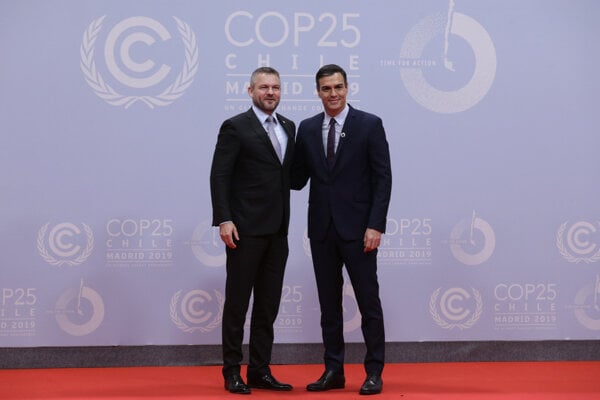 Spain's Prime Minister Pedro Sanchez and Slovakia's Prime Minister Peter Pellegrini shake hands at the COP25 climate talks summit in Madrid, Monday Dec. 2, 2019. The chair of a two-week climate summit attended by nearly 200 countries warned at its opening Monday that those refusing to adjust to the planet's rising temperatures "will be on the wrong side of history." (Source: AP/TASR)
Font size:A-|A+45

Slovakia understands the need to take steps related to climate changes and is ready for the necessary transformation to protect the climate. 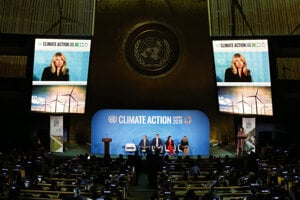 Related story:Čaputová in UN: Humanity forgot to pay its bills to the planet Read more

These were the words of PM Peter Pellegrini (Smer) at the UN Climate Change Conference COP25 held in Madrid.

This is why the country increased its ambitions and support to accelerate changes to achieve climate neutrality by 2050, he added.

“Slovakia is already projecting these ambitions into strategic planning, especially in our Energy and Climate Plan by 2030 and the Low-Carbon Technology Development Strategy by 2050,” said Pellegrini, as quoted by the TASR newswire.

This strategy should be completed early next year, he said, adding that Slovakia supports the plan to make Europe the first carbon-neutral continent. 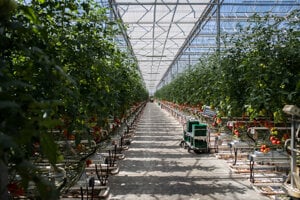 Pellegrini pointed out that Slovakia has already decided to reduce electricity generation from coal, leading to a gradual cancellation of the brown coal mining in some regions. At the same time, he stressed the need for social security in the region after the mines are shut down.

The government’s plan to help the Upper Nitra region after the local mines are closed has already been approved by the European Commission.

Pellegrini also announced a plan to increase the emission reduction targets from 12 to 20 percent by 2023. He pointed to an increase in energy efficiency and renewable energy targets by 2030. 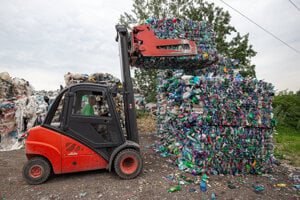 Related story:Slovaks care about the environment and climate change; so should companies Read more

Slovakia has decided to set aside another €2.5 billion for investments in climate change and the environment, Pellegrini continued.

“Slovakia has contributed for the first time to the Green Climate Fund this year, and plans to continue in the coming years,” Pellegrini noted, as quoted by TASR.

He called for joint action in this respect.

“The fight against climate change will require strong partnerships from global to local levels and across all sectors,” he stressed, as quoted by TASR. “We must not allow fear of losing political popularity or profit from the business to be greater than all rational arguments.”