A painter shows visitors the magic of Slovak winter

Vladimír Kompánek was not allowed to paint under communism. 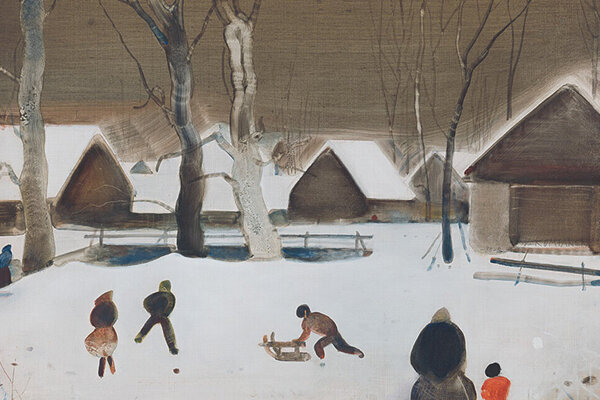 Vladimí Kompánek's winter-themed paintings are exhibited at the City Gallery of Bratislava (GMB) until the end of February 2020 (Source: GMB)
Font size:A-|A+117

“Winter arrived on St Martin’s Day. As horses galloped on the roads, the snow collapsed under their hooves with a squeak. It was a new and chilly winter, and they left clear traces on the white surface behind. It sent us to sleep once it began to play wintery melodies on our bricked stove.

The winter was waiting for us in the morning and we sought it in the most beautiful places. Near rivers, streams, in the mountains and valleys.

The winter trod with us from one village to another. It chased us until we were frozen to the marrow every God-given day.”

This is what winter in the Rajec Valley, located in the Žilina Region, looked like, as remembered by sculptor and painter Vladimír Kompánek. He describes it this way in his book Impresie (Impressions), within which he immortalised memories of his childhood.

The snow-covered cottages in the picturesque Rajec Valley settlements snuggling underneath snow-white hills, children fooling around in the snow, and the colourful fašiangy, a Slavic festival of plenty and joy ahead of Easter. He captures the romantically snow-blanketed countryside, as well as the joy and peace floating around at Christmas.

Vladimír Kompánek’s paintings are filled with such moments, which everyone should try to see before Christmas. The City Gallery of Bratislava (GMB) has opened his exhibition with the name, the Magic of Winter and fašiangy.