IT and creative industry may come when steel goes in Košice

Steelworks could leave Košice; the city is searching for a replacement. 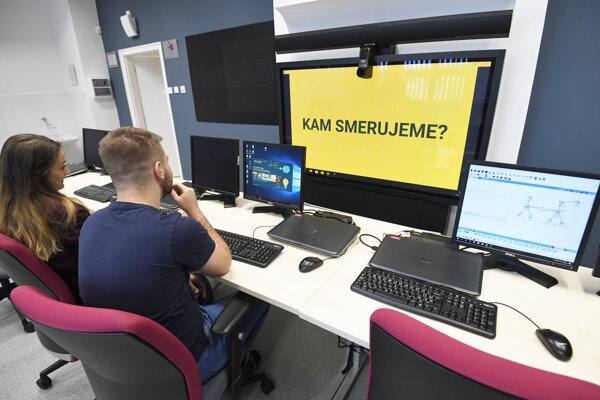 Steel production is deep-rooted in Košice. The first steel mills were established in the 1960s, and since then steel production has become the city’s most important sector.

There have been several rumours that the current owner of the largest steel plant in Slovakia, the American steelworks U.S. Steel, might depart Košice. Hence, the city needs to diversify the economy into several areas and look for potential in future technologies.

The last 10 years have been marked by the evolving IT business. IT companies are vital for innovation in Košice, however, their profile of shared service centres raises concerns among experts.

The opportunities for further development of this sector are becoming more limited, said Peter Džupka, head of the Department of Regional Sciences and Management at the Technical University of Košice (TUKE).

“This is mainly related to the availability of a skilled workforce and the cost of that workforce,” Džupka told The Slovak Spectator.

As shared service centres, they do not produce much added value, according to Michal Hladký, head of the Creative Industry Košice (CIKE), a municipal company focused on the creative industry.

“One day these companies might get up and leave the city,” Hladký told The Slovak Spectator.

The Košice plant of U.S. Steel remains the largest industrial company in the region, although the current difficult situation in the steel industry negatively affects the branch. In response, the company decided to reduce the number of employees in Košice and its subsidiaries by 2,500 people before 2021. Since the beginning of 2019, about 1,400 of 12,000 original employees have already left the factory, the Korzár regional daily reported.

The management also decided to shorten the working week in December 2019 and January 2020 to four days with 60 percent wage reimbursement per day not worked.

In addition, prices for steel buyers will increase at a rate of €25 per tonne at the beginning of 2020. They will continue to rise by €60 to €70 per tonne in the first six months of 2020, the SITA newswire wrote.

Steel production is a strategic decision for Slovakia, thus the country must also perceive the threat from this point of view, said Džupka. The metallurgical industry has a rich history in the region.

“What is of strategic importance is that there are functioning regional structures that would probably disappear quickly without steel mill operation,” Džupka said, listing the whole education system, top-level research, experienced managers and links to international business, education and research structures.

In contrast, Hladký pointed out that the economy is in great need of equally established investments without a priority dependence on multinational corporations such as steelworks or automakers.

IT is gaining popularity

Košice has responded to its needs through the development and promotion of the IT business. Several multinational IT companies, such as T-Systems and AT&T, placed their branches in the city in the past few years; however, the Association of Towns and Villages of Slovakia (ZMOS) has not seen highly valuable results as of yet.

“This segment is unlikely to employ thousands of people in hundreds of businesses,” Michal Kaliňák, the spokesperson of ZMOS, told The Slovak Spectator.

One of the new IT companies in Košice is the German company Cancom, which opened its first branch in Slovakia in November 2019 due to its continuous growth and needs of qualified employees.

“We want to support the dynamic growth of Cancom in Slovakia as well,” said Matúš Čopík, general director of the Košice branch of Cancom, as quoted by the TASR newswire. “Therefore, we plan to expand our staff with another hundred IT specialists in Košice.”

The company focuses on digital transformation, especially in the field of hybrid cloud solutions. In addition to the 700 m2 Slovak branch, Cancum has offices in Austria, Switzerland, Belgium, the UK, Ireland and the US, TASR wrote.

In 2007, the IT companies doing business in Košice came up with the idea of cooperating and gaining benefits together. Since then, the Košice IT Valley regional cluster has united IT shared service centers, other companies, schools and local government to motivate children to study and work in IT, improve IT study programmes, support cooperation between interest groups, prepare research projects and consultancy, and elaborate analyses and prognoses.

The presence of Košice IT Valley is crucial while the cooperation of interested institutions should ensure the competitiveness of the city, said Džupka.

However, there is still a lack of solid medium-sized companies originating in the city, said Hladký. Although big companies do not create branches with an interest in city development, they generate a decent amount of people capable of creating their own companies.

“It is much harder to eliminate a hundred small businesses in different IT segments than one big one,” Hladký said.

Entrepreneurs will always behave economically, so it is unlikely that those in the IT field will work locally, he added. The main advantage of these companies comes from the saturation of the workforce thanks to their corporate social responsibility (CSR) and educational activities.

Since 2013, when Košice carried the title of the European Capital of Culture, several local businesses have recognised the benefits of linking traditional activities to creativity. While Džupka now sees an appropriate support infrastructure and networks for the creative industry, Hladký still lacks a stronger drive among companies.

The innovativeness of companies in Košice is questionable due to poor knowledge about added value resulting from their creative activities, said Hladký. Creativity should increase with more competitors on the outside.

This industry only shows concrete results over time, said Kaliňák. They will continue to encourage more new investors and those still trying to figure out in what field they can lend their expertise.

“Here, too, the correct setting of priorities and their systematic support have proven extremely important,” Kaliňák said.

While Košice Region is adjacent to Ukraine and Hungary, there are many great opportunities for cross-border cooperation. Hladký pointed in particular to the current activities between the city of Košice and Uzhgorod in western Ukraine, and Miskolc and Budapest in Hungary.

The city currently cooperates with Ukraine mainly in terms of workforce, said Hladký. There are many Ukrainians in the service sector and schools in Košice. TUKE has about 10 percent of students from there.

Such migration and diversity led to the development of the municipality, according to Hladký. If the city falls into monoculture, it has no development impulse.

“The Ukrainians are not coming to Košice to revolutionise the city, but this migration is in some way out of balance, which is good,” said Hladký, adding that the city must respond to such opportunities.

In terms of foreigners’ behaviour, Hladký has noticed that people who work in the service sector generally assimilate with locals. On the other hand, students prefer to create their own groups, he said.

“Large Ukrainian neighbourhoods are not being created.We are not that big yet, but several enclaves may exist,” Hladký said.

City is still not smart enough

Similarly to other countries, Slovak cities compete in terms of their “smartness”. Some features of the Smart City concept already work in Košice, but experts still do not consider the city to be totally data-based.

First of all, the city needs to clarify its data policy, discuss the placement of infrastructure and develop small pilot projects, said Hladký. There are only a few companies that really deal with the Internet of Things (IoT), which could help design pilot projects, while startups and companies with real products should follow, he said.

“The development of a totally data-based city will take some time,” Hladký said.

IoT includes sensors, computers, digital machines and other objects used to collect, analyse and apply data to achieve greater efficiency in business. As part of Smart City, IoT is also used in urban activities such as the active switching of traffic lights or waste management.

IT on top, but youngsters missing

The old truth is that greater urban development depends on the quality of infrastructure.

While transportation is now at a satisfactory level, Košice has a very high level of IT infrastructure. In the recent past, the city was among the top 10 cities in the world with internet speeds comparable to those in Osaka, Japan, said Hladký.

Western cities had to use traditional cables for a long time after making big investments, according to Hladký. Košice directly laid down optical cables with a capacity that can be constantly increased.

“We are lucky that the infrastructure amortises for a very long time,” Hladký said.

A strategic part of the city’s infrastructure is the population of young people.

Without enough talent the city cannot be competitive in the long term, said Džupka.

There is a lack of cooperation between the city, region, universities and major employers right now.

“The city should focus on attracting and retaining as many young people as possible to study at secondary schools and especially at universities in Košice,” Džupka said.

“Sometimes there are no model examples that would make these schools more attractive,” he said.

If the city wants to develop, it needs more companies producing added value in the creative industry and IT sector. The future importance of IT will depend on the ability of Košice to offer quality infrastructure and enough skilled labour, said Džupka.

Experts point to the need of the public sector to link education to the labour market and spatial needs. Self-governments should not stimulate any economic sectors, but create good conditions for doing business in all sectors, said Džupka.

“The quality of life of the city inhabitants should be above everything else,” Džupka said.