Expert sees more of a pre-election campaign than an effective solution. 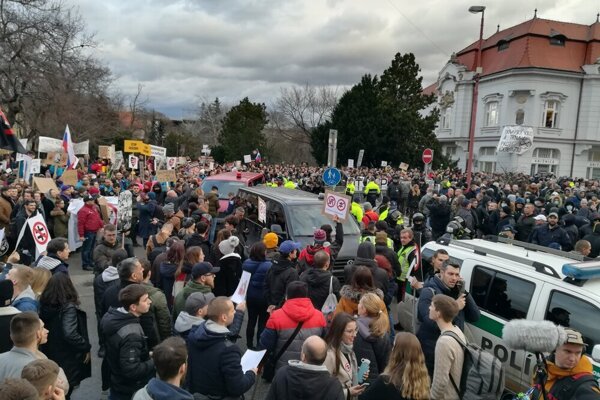 The far-right party that some say stands a chance to win the upcoming parliamentary election is betting on their well-tested campaign tactics and is organising public gatherings around the country. Yet this time around they are facing an unprecedented wave of counter-gatherings.

The anti-fascism protests, organised to coincide with the campaign gatherings of Kotlebovci - People’s Party Our Slovakia (ĽSNS), started off with a handful of people demonstrating their disagreement with the far-right party's campaign in their town. Some parties of the democratic opposition joined the protests and particularly the Progressive Slovakia/Spolu coalition made it one of the leading themes of their campaign.

Sociologist Martin Slosiarik perceives these gatherings against Kotleba as “an attempt to show another face of Slovakia” – to show that change can be democratic, that lies are not the way and dissatisfaction and frustration are not a reason to permit violence in society.

“To think that silent acceptance will lead to solving the problem [with extremism] is naïve,” Slosiarik told The Slovak Spectator.

The meeting in the north-east Slovak town of Levoča gained media attention when, for the first time, ĽSNS’s opponents outnumbered supporters and it resulted in the party ending its meeting prematurely. The collision of the two groups escalated on January 31 in Trnava where ĽSNS supporters attacked members of non-parliamentary PS/Spolu.

Not all politicians view attending the protest gatherings against ĽSNS as a positive way of fighting fascism. Most notably, Igor Matovič of Ordinary People and Independent Personalities (OĽaNO) said on February 2 on the public service television RTVS that the anti-meetings will not stop the growth of support for ĽSNS.

While politicians of PS/Spolu, Za Ľudí, of PS/Spolu, Christian Democratic Movement (KDH) attend the protests, Matovič says he does not agree with that.

“It is irresponsible because the overwhelming majority of ĽSNS voters are disappointed in politics and they do not vote for the party because of some inclination towards extreme opinions or ideas,” he said.

Matovič even went as far as comparing the situation to Hitler and 1930s Germany, when he said that “the Germans who were going to protest against him on the streets were responsible for Hitler's rise to power.”