Two monumental castles were built mirror-like in the 13th century. 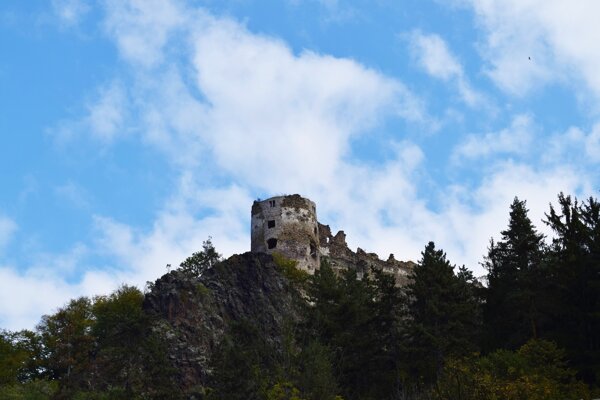 The historical calendar showed the summer of 1526.

The country was living through its dark ages.

The Ottoman sultan Suleiman the Magnificent defeated the forces of the Kingdom of Hungary, led by Louis II.

The king died and with him the majority of his 30,000 strong army.

And Revište Castle turned into a party place.

When the Turks journeyed from Esztergom to Pohronie, the castle lord, Ondrej Dóci was captured and dragged back to the Ottoman Empire.

Lady Dóci did not cry her eyes out.

Tears streamed down her face, but from pure joy. Finally, she was ecstatic and her secret desires were fulfilled. Recently, she had been thinking about doing away with him. The idea of poisoning his wine with a toadstool infusion or hiring forest robbers had come to her mind many times. Miraculously, she got rid of him without an effort.

Although her husband was gone, the most important things, her possessions, remained.

She gained her desired freedom and could focus on her love life. Feasts and dances in the castle were never-ending.

A castle for a joker?

On the opposite bank of the Hron River, on the rock where eagles nest, another castle is placed, Šášov Castle.

The castle lord had it built for his court joker. Probably.

He saved his life while hunting.

Two monumental castles were built mirror-like in the 13th century. Revište castle was built on an andesite rock above the right bank of the Hron, Šášov castle on the steep “Eagle’s Rock”.

The famous and rich mining towns of the Middle Ages!

Seven legendary towns were situated on the trade road closely following the course of the Hron, which connected Esztergom and central Slovakia.

And this route was protected by 15 castles.

The stories of the Slovak castles started in the 9th century as wooden fortresses, which were later rebuilt in stone. At this time, the castles of Bratislava, Trenčín, and Nitra were erected.

The 13th century was the century of the Mongol invasion and a huge construction boom. More than 150 castles were built. 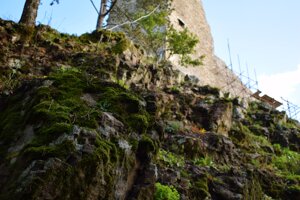 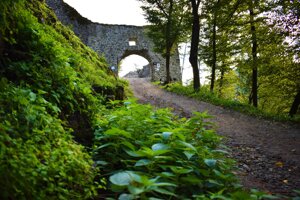 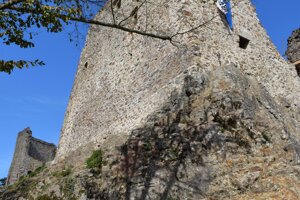 After a massive reconstruction in the 15th century, the castles of Trenčín, Spiš, and Devín became the biggest in Europe.

In the 16th century, the Ottomans saddled horses and set out for a campaign in Europe. To counter, the fortresses of Fiľakovo, Bzovík, and Komárno were constructed, the gems of European military architecture. In its time the fortress of Komárno was the largest and strongest defensive fortification of the Austria-Hungarian Empire.

In 1594 the fortress held successfully against a one month Ottomans siege.

Yes, the royal Cochem Castle in Germany was built in 1000.

And Warwick castle in England, probably in 1068. The oldest castles in Europe. And in the world.

Maybe the castles in Europe were built earlier than the Slovak ones.

But they don’t stick out of the deep forests, nor hover over the horizon, nor even look down from massive rocks.

They used to protect.

Now they gaze afar, to the future.

And in their ruins, among the strong walls, you can smell of their courage. Or you could have Liz Gilbert before you, sitting in the heart of Rome with the words, “ruins are a gift. Ruins are a road to transformation.”

And when you stop on the riverbank of the second longest Slovak river, the Hron, as the Roman Emperor Marcus Aurelius in 168 did, you will maybe create a remake of his “To Myself meditations”.