Brave heart: Hiking and exploring the castle triangle of Beskydy

Explore the Súľovské vrchy mountains and its hidden gems. 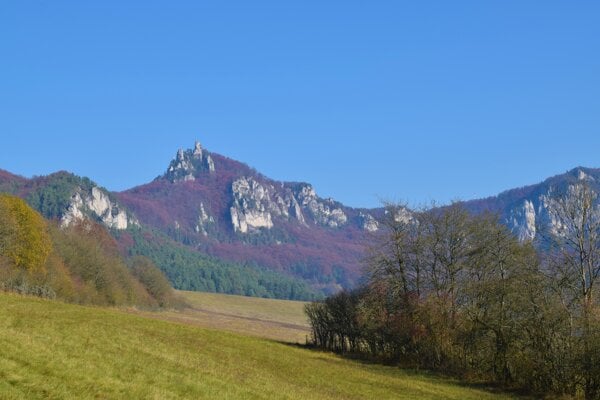 February 15, 2008. In Pezinok, a small wine town near Bratislava, almost 6,000 people gathered to protest against building a waste disposal centre. One brave woman led the fight, and eleven years later, that woman was elected the first female president of Slovakia.

Assertive and cheeky was the inventor Marie Curie. She discovered radium, was the first female professor at the Sorbonne, and was awarded the Nobel Prize. And she bravely proclaimed to her husband that she was more intelligent.

These women became a symbol of radical fighters for women's rights. The courageous English suffragettes fought for an election law for women.

It was a very long war - a hundred years long. In 1429, France clashed with England, and France won in the battle near Orleans thanks to one brave woman, Joan de Arc.

Lietava Castle, located at the foothills of the Súľovské vrchy mountains, was once protected by the brave Slavic female goddesses, Bosnica and Lada.

Let's take a journey to find the courage inside; let's explore the Súľovské vrchy mountains and the castle triangle of Beskydy.

A 27-kilometre-long route starts in the village of Lietavská Lúčka. The castle, which has been called Litova, Letava, Lethawa, or Zsolnalitva, is located above the village at an altitude of 635 m. It is one of the largest and most beautifully preserved ruins not only in Slovakia but also in central Europe. A walk through the forest will lead us in front of the gate. After entering, we will be invited by two goats and one buffet. And when we raise our heads to the majestic castle walls, we will maybe see the rune writing of old Germanic origin on the castle rock. Or we will experience the atmosphere of the Roman Colosseum. The castle hill knows many legends; it was even inhabited in the Bronze Age by the mystic people of ash fields, with many secret rituals and sacrifices.

We will then move forward to Hričov Castle, where devils with mystic power rule and force everyone to abandon the castle. And on the rock in front of the castle, The Stony Monk is located. He stares and stares.

The Hrichou, Castrum Hrichou or Riczo castle is situated on the rock, at a height of 507m. Its name is connected with the word Grič, which means rock or rocky. The castle hill was even inhabited by the old Slavs.

It was mentioned in 1208, and the Hričov Castle had many famous owners! During the centuries, the castle door handle was touched by Matthew Csák of Trencsén, the strong and fearless lord of Váh and Tatra, the noble Balass family, Stibor of Stiboritz - a good friend King Sigismund of Luxembourg - and the well-known robber knights, the Brothers Podmaniczky.

And the path through the forest will lead us to the castle gate again. It is surrounded by twenty wooden tables, an invitation to stop and read before continuing through the white Súľov Rocks and to the Súľov Castle.

A spot for fairy tales

The Súľov Rocks! This fascinating and attractive rock town born from the prehistoric sea is like a shadow of Mordor in north-western Slovakia. Not occupied and controlled by Sauron, but by mythic and fairy-tale beings like dragons. Unbelievable? Maybe.

Let's talk about a mysterious and legendary rock town. Its dark shape dominates the region near the Váh River and occasionally disappears in the fog. There are castle ruins hidden in its heart, longstanding protectors of the roads since the 15th century, built among three monumental rocks. There are also bizarre rock formations with the names Maria Theresa, Owl, and Spruce Tree. 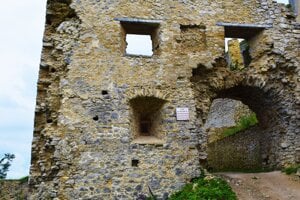 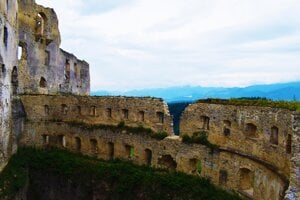 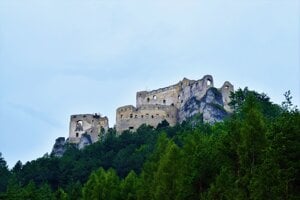 There is also a 60-metre-long cave. In its interiors, the Stone Age people sat around the fire and gossiped.

The path continues to the cascade Hlbocký waterfall, a fairy-tale place, reminding us of the fairy-tales Perinbaba (“The Feather Fairy”) or Soľ nad zlato (“The Salty Prince”) that were filmed here.

Soon after, we will find ourselves among the rocks of the narrowest Slovak gorge, the Manínska gorge, neighbouring the “roof of Slovakia”, the Kostolecká gorge.

There we will stop for a moment and think of all of the brave women. The brave women in the past who fought for their rights. The brave women today, alone hiking or running the 770km long Path of the Heroes of the Slovak National Uprising or The Pacific Crest Trail, 4,280 km long.

Eleanor Roosevelt once said, a woman is like a tea bag - you never know how strong it is until it’s in hot water. Or alone in the mountains.