The Bratislava Zhora wheel offers a bird’s eye view of the city. 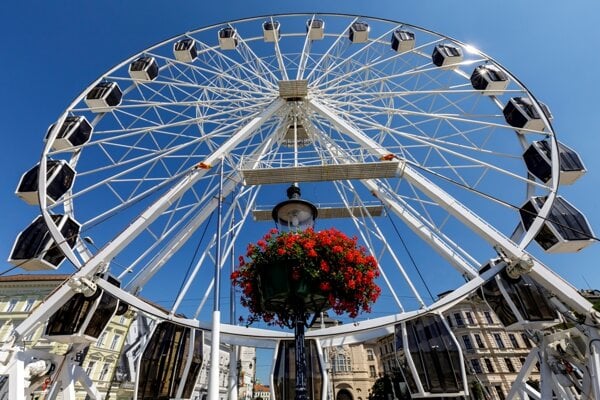 “I have been on the London Eye but this is a completely different experience; I’m a native Bratislavan and no other place offers a view of the city centre from such a perspective,” said Martina Horváthová after a ride on the Bratislava Zhora (Bratislava from Above) wheel. While the London Eye takes visitors to a height of 135 metres, Bratislava’s new attraction rises to 30 metres.

The observation wheel sprung up on the Danube bank in the historical centre close to the Slovak National Gallery and the Reduta concert hall as support for local tourism hit by the coronavirus pandemic. The wheel is only temporary and will remain on the site until the end of September.

The Staré Mesto (Old Town) district allowed the wheel to be erected as part of the cultural summer festival, Leto na Nábreží. The project came about after the council asked people what they thought about such an idea in an online survey. Sixty three percent of those who voted supported it, while less than 37 percent were against.

“The observation wheel in the heart of the Old Town is a refreshing idea and makes the summer atmosphere of the city more special,” said Martina Štefániková from the Old Town local office, as cited by the TASR newswire. 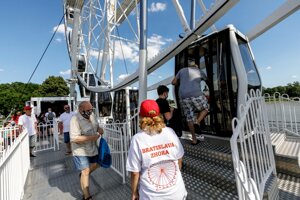 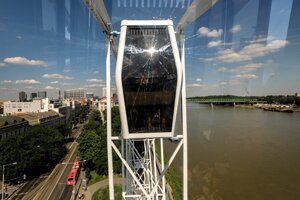 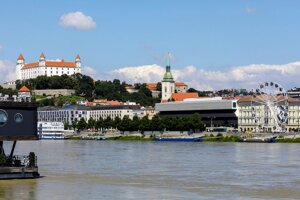 Moreover, the wheel brings in additional money to the Staré Mesto’s pocket as its operator pays tax on it for the use of the public place.

“We will invest this money into the beautification of public spaces, more specifically into greenery and the planting of new trees,” informs the Old Town council and rebutting the idea that the wheel detracts from the view of the city. “The white construction of the wheel is subtle and in addition it is a photogenic object.”

Nevertheless, the wheel has left public opinion much divided, particularly on social networks. Some people praise the idea, pointing to similar wheels in Vienna or London, or even to Paris where the Eiffel Tower similarly divided public opinion 130 years ago. Others see it as a distortion and a shame on the city saying that it should not stand on the embankment on the side of the city as a pleasure ground with merry-go-rounds and similar attractions used to stand on the Petržalka embankment.

"If people want a bird's eye view of Bratislava, they should go up to the Castle, the Slavín memorial, the UFO observation platform at the SNP Bridge or the television tower,” writes Mimi Kočanová. 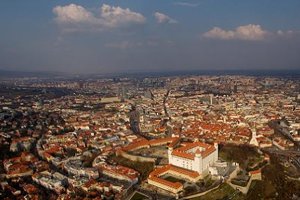 Related articlePeering at Bratislava from on high Read more

The monument protection authorities dislike the wheel and the way it was placed on the bank but they were not involved in the decision-making process, since the wheel is just a temporary attraction. Bratislava city council did not have its say either, as the embankment is under the administration of the Old Town.