The verdict is not valid yet. The prosecutor appealed. 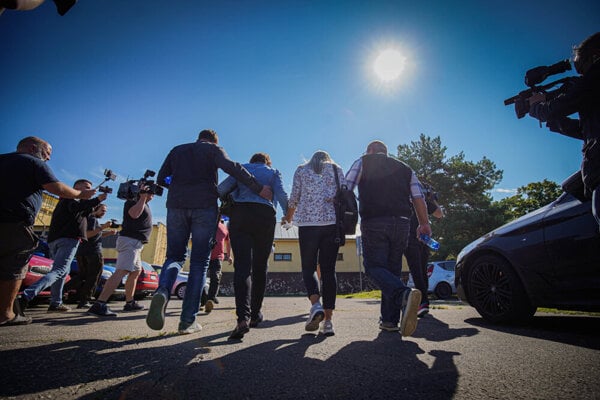 Marian Kočner and Alena Zsuzsová were acquitted of charges related to the murders of Ján Kuciak and Martina Kušnírová. The court said on September 3 that that the deed happened, but it has not been proven that they had committed the crime.

Tomáš Szabó and Kočner have been found guilty of the unauthorised carrying of weapons. Kočner was given a financial sanction of €5,000 and an alternative punishment of five months in prison if he fails to pay the sum.

The verdict is not valid yet as prosecutor Vladimír Turan appealed the decision to acquit Kočner and Zsuzsová of charges. He will comment on the rest of the verdict soon. At the same time, the lawyers representing the families of the murdered couple, Roman Kvasnica and Daniel Lipšic, challenged the decision not to grant compensation.

The case will now move to the Supreme Court.

The parents of the murdered victims left the courtroom during the delivery of the verdict, when the senate said Kočner and Zsuzsová were not guilty. The editor-in-chief of Aktuality.sk, Kuciak's former boss, also left the room.

Despite being acquitted of charges, Kočner remains in jail as he was already sentenced to 19 years for forging promissory notes worth €69 million.

Not even Zsuzsová may remain at liberty. It is very probable she will be detained as soon as she is released for the preparation of the murders of prosecutors Maroš Žilina and Peter Šufliarsky, and lawyer Daniel Lipšic. She is also accused of ordering the murder of ex-Hurbanovo mayor László Basternák, the Denník N daily wrote.

Disputes in the senate

The decision on Kočner and Zsuzsová was made by two senate members, Ivan Matel and Rastislav Stieranka, who outvoted the senate chair, Ružena Sabová, Denník N reported. They also prepared the explanation of the verdict.

It is not common to outvote the senate chair in such an extensive case as it is the chair of the senate who reads the whole file in detail, according to Denník N.

The daily also pointed out that the disputes in the senate were behind the decision to postpone the verdict back in August. Some of the senate members do not have a good relationship with Sabová, who has complained about several of her colleagues in the past. She didn't even know that Matel and Stieranka planned to outvote her, and was not ready for this version of the verdict in early August, Denník N reported.

>>> Follow all updates about the Kuciak murder trial here.

Investigative reporter Ján Kuciak was killed in his house in Veľká Mača on February 21, 2018. His fiancée Martina Kušnírová was shot dead along with him. Very soon after their dead bodies were discovered on February 26, 2018, the police said that the murder was most likely linked to Kuciak’s journalistic work.

Zoltán Andruskó, who has admitted to acting as the middleman between those who ordered the murder and those who executed it, was sentenced to 15 years in prison on December 30, 2019, in a separate proceeding, based on his plea bargain deal. He has thus become an important witness in the case against the four persons.

Hitman Miroslav Marček pleaded guilty during the first trial session on January 13, 2020. The court subsequently ruled to deal with him in a separate trial and sentenced him to 23 years in prison.