Alternative city guides developed by Slovak-Dutch team are a hit across Europe. 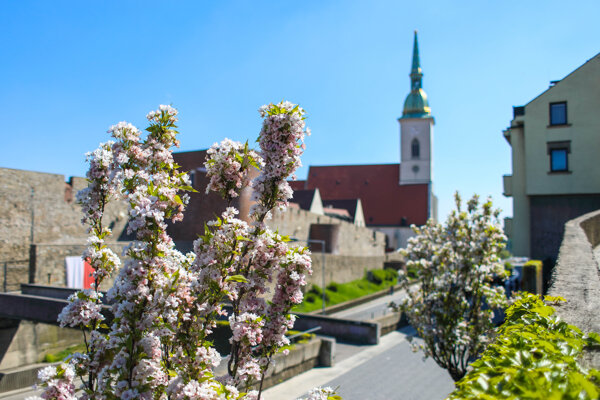 During the game players can admire some of the city’s best views. (Source: Courtesy of Secret City Trails )
Font size:A-|A+38

Coming across a group of people staring desperately at the logo of the University Library in the centre of Bratislava’s Old City, an observer might be forgiven for thinking they are lovers of literature admiring one of the country’s most important libraries.

But they are more likely to be playing a popular interactive discovery game that takes them around the city and are trying to precisely name a symbol in the library’s logo to move to the next stop on their journey.

Developed by the start-up Secret City Trails in cooperation with local bloggers from the Welcome To Bratislava website, the game for 1-5 people can be accessed at the www.secretcitytrails.com website.

After making a payment, a link to the game is provided and players can start. No app needs to be downloaded, all that is needed is an internet connection and a mobile phone.

The idea behind the game is to show players the city, but not in the same way a traditional guided tour would, its creators say.

It asks players to identify specific items at landmarks - for instance what is being held in a person’s hand in a specific statue - or explains historic inscriptions or mosaics on buildings.

They are also asked to solve anagrams and look for things in the city they would probably not have known even existed.

Slovak Kristína Palovičová, co-founder of the start-up behind the game, said it was a way to inspire adults to play games again.

“Adults have generally stopped playing games, even though it has been proven that playing games improves productivity, creativity and overall mental health,” she said.