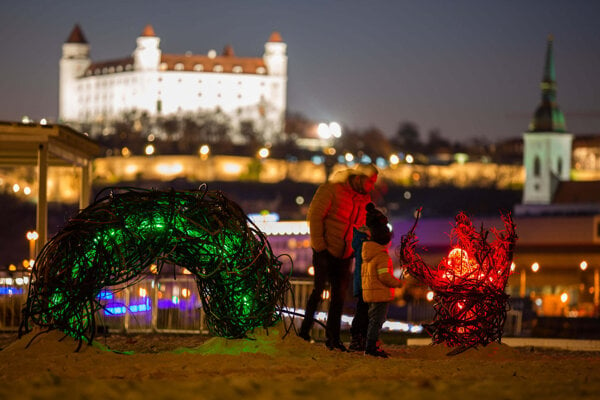 An oversized glowing worm in the picture above, made of recycled cables, talks about the power of nature and its ability to adapt to various adverse conditions caused by human intervention.

The work of art by Radovan Dranga and Alex Zelina is a critique of human consumption and raises important current questions about man's relationship to nature.

The work can be found on the Tyrš Embankment in Bratislava until December 20, 2020 as part of the White Night Festival, which could not be held this year because of the pandemic. However, it is back for Christmas. A list of other artworks and where to find them is available here.

For more Christmas events in Bratislava, scroll down to our Weekend Reads.

The popular museum and look-out point is now closed to the public due to its long-awaited reconstruction. Bratislava City Museum plans to install a new exhibition and to create barrier-free access for people who are blind or hard of hearing. The previous reconstruction took place in the seventies.

The Košice cathedral to become a blind-friendly sight

St Elisabeth Cathedral in Košice will be more accessible to blind and visually impaired people as of early December. A total of 12 information desks with QR codes will make it easier for them to get to know the famous sight. 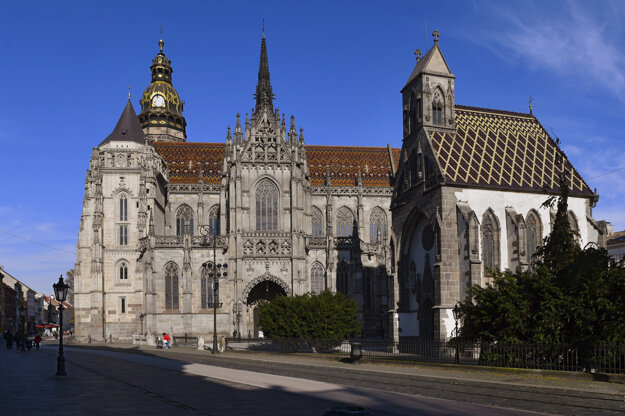 The fastest way to explore Slovakia is by train

You may hear people complaining about Slovak trains. Yet, getting on a train and travelling from Bratislava to Košice is an unforgettable experience. In a few hours, you will see all sorts of landscapes and meet different people for little money. Matt Reynolds writes about his experience.

Before the construction of a new park on Halenárska Street in Trnava, a team of archaeologists found traces of a Celtic settlement from the Lathenian era in the area. Several fragments of Celtic ceramics were discovered. The park will open in late 2021.

Israel’s diplomat hopes in the revival of razed Bratislava synagogue

“Here, after a few weeks, I felt at home. It was an amazing feeling.”

Set out on a trip around Jewish Bratislava with Modai, who will tell you what places he enjoys going to and why he considered Bratislava to be a village years ago.

Turning a shoe box into a gift box

People in Slovakia have been supporting, for the past three years, the 'How Much Love Can You Fit Into A Shoebox?' initiative that aims to deliver Christmas presents to older people in care and nursing homes around the country, who may otherwise receive none.

This year, the initiative ends on December 6, which means anyone can still take a shoe box, place there something SCENTED, SWEET, SALTY, and something to READ, WARM UP, and REMEMBER, and thus turn it into a gift box.

This box should then be handed over to a person who has agreed to deliver it to an organisation in their town. More useful information [in Slovak], given the pandemic, is available here. 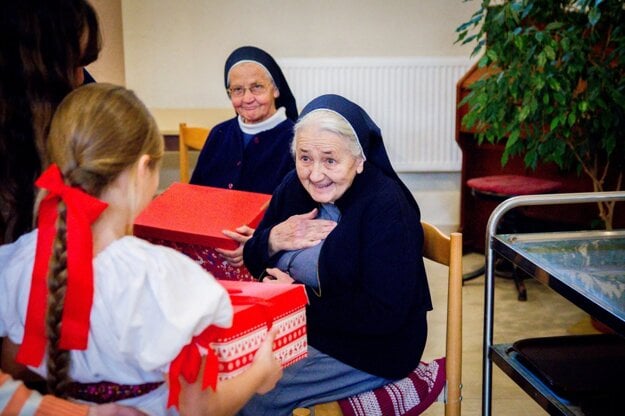 FILM: Another Slovak film, after Správa, has the ambition to win an Oscar. The animated film SH_T HAPPENS has qualified for the ‘battle’ for the famous award.

BOJNICE: The castle in Bojnice will organise Christmas tours from December 6 until early January. St Nicholas, referred to as Mikuláš in Slovak, will visit the castle on December 4 and 5. Plus, anyone can contribute to decorating a Christmas tree at the castle by bringing and placing their own decoration on the tree. In return, you will receive a decoration for your tree at home.

DESIGN: Bratislava Design Week takes place between December 3 and 7. Go and see exhibitions online or at Zoya Gallery and Apponyi Palace. Some works of art are installed on the exterior. Discussions and lectures, some also in English, will be held online. 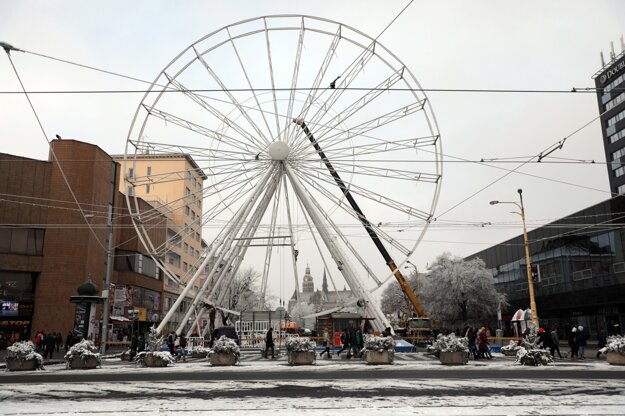 The ‘Košice Eye’ will return to Main Street in the city of Košice for Christmas. The 32-metre-high tourist attraction will launch on December 10. (Source: Kosice.sk)

EXHIBITION: An outdoor and free exhibition of photographs entitled 'The Country of Winners' brings to life memories of key achievements in Slovak sports in recent decades. More than a hundred photos can be seen outside the National Football Stadium in Bratislava until December 31.

MUSIC: The NEXT festival, an annual celebration of exploratory music and sonic art, takes place online until December 6. Entry to all events is free, but people can support the festival with donations. See the program.

The merriest season of all will preserve its festive spirits in Bratislava despite the pandemic. Concerts, exhibitions, masses, as well as Christmas markets and trees are waiting for locals and visitors to Slovakia’s capital. See a list of events happening in Bratislava.

This grandma rocks. With blue hair, she is an Instagram star

In her mid-80s, an old lady with a golden heart and blue hair has become an Instagram sensation thanks to her grandson and photographer Marek Pupák. Her fanbase increased rapidly after a video call with President Zuzana Čaputová, who is a huge fan of this grandma. Have you become a blue.grandma fan too? 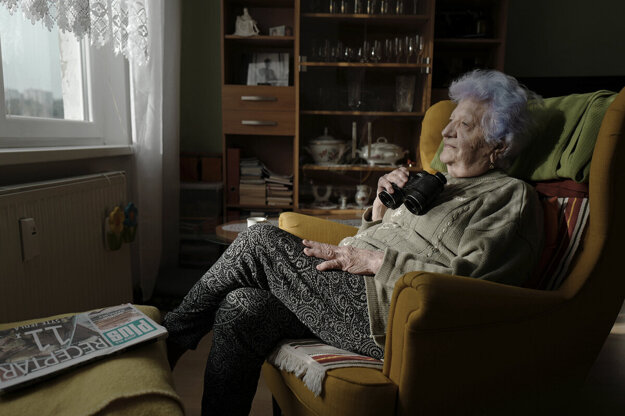 Photographer Marek Pupák takes pictures of his grandmother. He also created the blue.grandma profile on Instagram, where he posts the photos of her. (Source: Marek Pupák)

Why? The lack of publishers’ interest in authors’ books is only one of many reasons. Some authors are lured by the idea of creative freedom; others want to control the entire process, from writing to distribution. They can even prevent their book from being sold at a 50-percent discount a half-year after publication.

We’ll leave you with a bit of festive Slovak music

Paľo Habera’s successful album of Christmas songs Svet lásku má [The World of Love] was first released in 1996. After 24 years, the Opus label decided to re-release the record on December 4 in a vinyl version.

The eponymous and iconic song, Svet lásku má, features the late Czech singer Karel Gott and Slovak opera singer Peter Dvorský. On the album, listeners can find another 12 Christmas songs, either Slovak or foreign. Nonetheless, the foreign songs have Slovak lyrics, which is why Mistletoe and Wine, for example, is called List Ježiškovi (A Letter to Baby Jesus).

Back in the nineties, Habera’s album was seen as the most expensive record. Was it even worth it? Well, listen to the Svet lásku má single and see for yourself.

The next Spectacular Slovakia Weekly: December 11