Location of coronations of the Hungarian Kingdom

18 monarchs of the Hungarian Kingdom were coronated in St Martin’s Cathedral, the biggest church in Bratislava. 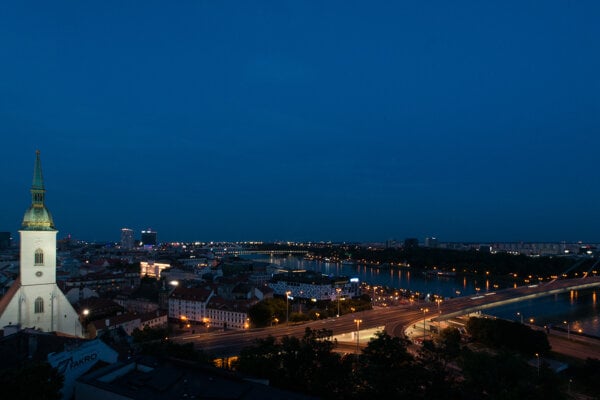 St Martin’s Cathedral is the biggest and most noteworthy church in Bratislava, which reached the height of its importance between 1563-1830 as the location for the coronation of 18 monarchs of the Hungarian Kingdom.

Before that, the cathedral started life as a tiny 13th-century Romanesque church, originally on the top of what is now Bratislava Castle Hill. In 1221, Pope Honorius III gave permission for the church to be moved to the area beneath the hill, but congregations soon outgrew it as the city flourished. Construction of a gothic building started in the early 14th century and was eventually consecrated in 1452. Further reconstructions continued, including the addition of a bigger, late-gothic presbytery between 1461-87, until the cathedral assumed more or less its present form.​

It is a three-nave structure, each of the same height, constructed by the same workshop responsible for St Stephen’s in Vienna. Although its interior is suitably ornamental, much of the cathedral’s exterior is relatively plain, especially compared with other gothic cathedrals. This is owing to the cathedral’s dual purpose as part of the city’s fortifications. Its entrances, whose importance changed over the centuries, are on its sides and its western façade, with its “front” comprising part of the fortification wall. Remains of the city walls are preserved today at the southern end of the cathedral.

After the Hungarian Kingdom lost the Battle of Mohács to the Ottoman Empire in 1526 – yielding its capital Buda and its coronation city Székesfehérvár – Bratislava (then Pressburg) became the de facto capital of the displaced Hungarian monarchy and the cathedral was used for coronations. With renewed importance, the cathedral’s interior was rebuilt in the baroque style, with most of the work attributed to the prominent Austrian baroque sculptor Georg Rafael Donner, who had been invited to Pressburg by Archbishop Imrich Eszterházy.

Donner spent about a decade in Pressburg, when the cathedral got a new main baldachin altar, featuring three of Donner’s lead sculptures. Flanked by two angels, the central sculpture depicts St Martin on a horse cutting his cloak to share it with a beggar. The coronation of Maria Theresa took place in front of this altar in 1741. Donner also built the Chapel of St John the Almoner to hold the mortal remains of the Cypriot saint from the 6-7th century. The archbishop is now also buried in the chapel. 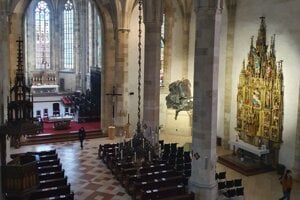 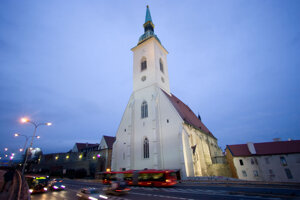 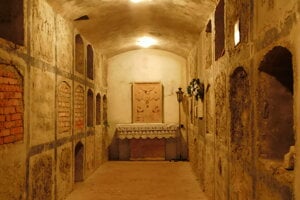 In the 19th century, the cathedral underwent further extensive renovations, this time to remove almost all the baroque elements and replace them with gothic features. The main baroque altar was re-assembled and while the equestrian sculpture of St Martin remained in the cathedral, the angels were moved to Budapest. Only the Chapel of St John the Almoner and its interior kept its original style.

The current shape and look of the cathedral dates more-or-less from this period. Its main entrance is from the northern nave, beneath an 85-metre high tower that is topped with a gilded copy of the crown of St Stephen. It is 1.6m high and 300kg in weight, an appropriate reminder of the significance of the cathedral during coronation times. Contemporary visitors can see in the cathedral a vast haul of treasures amassed here during its 550 years of existence. These include all the precious items used during holy masses: chalices, reliquaries, bishops’ crosiers and chasubles, etc., plus exceptional paintings and wall adornments. Probably the most precious exhibited piece is the 109-cm high gothic monstrance. There is also a treasury located in the sacristy below the tower and in the adjoining chapel.

In the western façade is the Chapel of Sophia of Bavaria, which once served as an archive containing 3,285 medieval documents and more than 23,000 papers from the period after the 1526 Battle of Mohács, as well as several liturgical books. The crypts beneath the cathedral were used for burials up until the end of 19th century, and are now accessible via the Chapel of St Anna in the cathedral’s northern section. The door at this end was previously the main entrance portal for the church and is decorated by a tympanum featuring a relief of the Holy Trinity. The chandelier in the three-nave hall with eight columns is from the end of the 16th century. The cathedral continues to be the home of the Bratislava Archdiocese and apart from holding holy masses, weddings and other religious events, it is also the venue for frequent concerts. In the past, Ludwig van Beethoven premiered his Missa Solemnis here and Franz Liszt is also believed to have premiered some of his works in the cathedral. The organ from 1880 was replaced in 2010 with a piece by the German organ master Gerald Woehl.

The church is open Mondays through Sundays but closed on Saturdays during weddings.

Admission is 2,5€. Entrance is free on Sundays.
For more pricing options see the website of St Martin's Cathedral.