In the nest of silence: Lednica Castle and Skalka

Discover a fairy-tale castle ruins and a mysterious monastery in Trenčín Region. 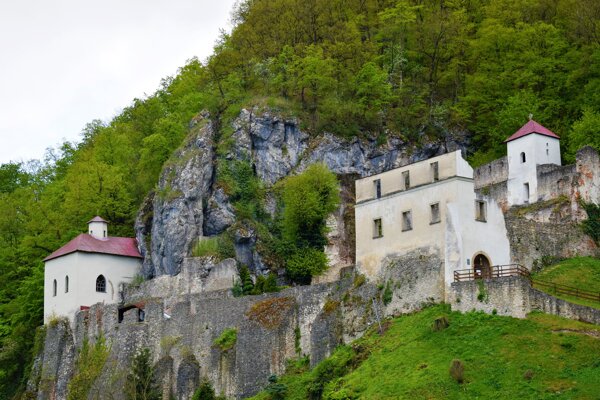 Buckingham Palace, the White House, and The Big Bang Theory. All have one thing in common.

Established in Lednické Rovne in 1892 by Jozef Schreiber as the last and the biggest glassworks of Vienna´s Schreiber und Neffen. A state of the art marvel of the time.

He also owned a large manor house, which was inherited by his four sons. And one of them, Eduard, succeeded as his father had. In 1910 he filmed the first Slovak movie "The Kidnapping".

On a steep cliff, 405 m above this village, the romantic and fairy-tale mediaeval Lednica Castle hovers. It is embraced by the White Carpathians. It, perhaps the most inaccessible of Slovak castles, looks like an eagle’s nest.

There is no road anymore, only the castle remains. It, the arms of the White Carpathians, its natural surroundings, a mountain pass, and Moravian frontier just at the edge of the horizon. Access to history is through a rock tunnel. And 79 stairs. Come in and be welcome! Let the journey into the history begin!

Our pilgrimage commences in the second half of the 13th century. The Mongols have finally withdrawn leaving devastation in their wake. Stone by stone the castles were built. Lednica Castle was constructed to protect the western border of former Kingdom of Hungary.

In the 14th century, the strong voice of Máté Csák of Trencsén, unconquerable ancient lord of this region, speaks aloud. Unconquerable and progressive too were castle’s next owners, the infamous thieving knights, the brothers Podmanickí.

1708 was hard for the castles located along the Váh River. Most of them were destroyed by the imperial troops. Only Lednica Castle, hidden deep in the forest, survived, and was even reconstructed by its next owners, the noble Maťašovský family. At that time the castle had 45 rooms and fortified towers. 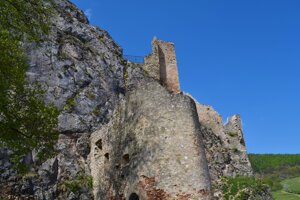 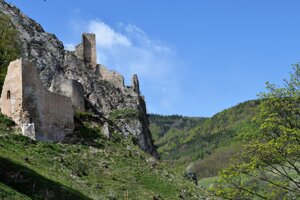 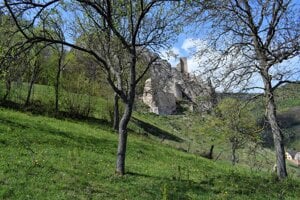 Today only the strong walls bear witness to its fame. Legend says that the spirit of the beautiful lady of the castle, Katarína, walks atop them in the night. The lord of the castle kidnapped her on the day of her wedding, but Katarína, wearing a white gown, chose death, jumping from the castle walls. And where she fell, there a spring burst forth. It wears her name. Nowadays eagle-owls and falcons spread their wings to protect it. The last owners of the castle.

The Váh is not only the longest Slovak river, it is the national symbol. Along it, more than 50 castles are scattered. And one mysterious monastery is carved in the rock.

The Skalka is located on the way from Trenčín to Nemšová, only 30 minutes’ drive from Lednica Castle. It is the oldest pilgrimage site in Slovakia, consisting of two objects, Malá Skalka and Veľká Skalka, underground tunnels, and a cave.

The Benedictine abbey at Skalka was founded in 1224 by the bishop of Nitra, Jacob I. in the memory of hermits St Andrew Zorard and St Benedict of Skalka. The stony church is a three-floor building with a wooden ceiling. In the cave chapel, Christ’s tomb and a statue of sitting eremite from the 18th century are located.

Here in this dark tiny cave with wet walls and mud you can feel the authenticity of worldly disconnection and spirituality. And when you walk through you will find yourself in the light of the church. And the forest.

And here in its silence, under the trees, you will calm down and let your thoughts stream around. You will feel the magical power of the present moment.

As John Amos Comenius, the teacher of nations, did, when he in 1675 stopped at Katarínka’s stream in Lednica.

And maybe you will hear his words, for humans to become human, they must be educated.