A comfort zone, a place to stay: Gýmeš a Hrušov 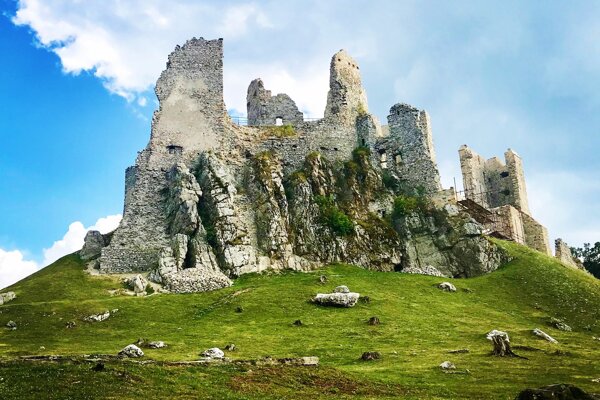 It was such a happy and exciting day! On July 29, 1923, a man with white hair and a white moustache, embraced by the mystic mist of invisible power, got out of the car. A mixture of Charles de Gaulle and Winston Churchill.

He got out in front of the Classicistic manor house in Topoľčianky. Here, in the huge English park, in the shadow of trees, he spent each summer until 1933.

Here he read books and recorded his ideas. Here he became a greater philosopher. Here he rode his horse, drank from the small forest wells, and silently observed wild animals.

Today a big statue serves as a monument to his presence.

And an old telephone in his office. And the leather chair in the library, where he used to sit and drink tea.

Who was this legend?

His name was Tomáš Garrigue Masaryk. And he was the first Czechoslovak president.

The picturesque manor house in Topoľčianky, once a Gothic-style water castle, later a Renaissance fortress, was rebuilt in the Classicist style and is considered one of the purest and most beautiful examples of architecture in the Classicist style in Slovakia. This place maintains its old fame, it was a summer residence of the Habsburg royal house, and of Czechoslovak presidents.

Tomáš Garrigue Masaryk also liked the atmosphere of the castle ruins, hidden in the forests of the Tribeč mountains. He often rambled the green forest paths near Skýcov village and Hrušov castle. Here he sat under the old pear tree, grilled corn, drank wine from the local vineyards, and conversed with foreign minister Edvard Beneš.

The Gothic Hrušov Castle was built at the end of the 13th century by the famous lord of the Váh river and Tatra mountains, Máté Csák of Trencsén. It is located near the quarzitic Skalka mountain, at the height of 448 m, in the Tribeč mountains. The castle protected an important trade route.

The red marked hiking path to the castle starts in the parking area located between Topoľčianky and Skýcov. A pleasant walk through the forest ends in front of the amazing white ruin, reminiscent of a monumental white rock. According to legend, a great treasure was hidden here. And it had three animal protectors, a Crab, a Cock and a Snake, who attacked all who attempted to take the treasury. So don't try it! It can be dangerous.

Welcome with a "space dance" 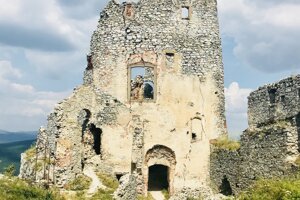 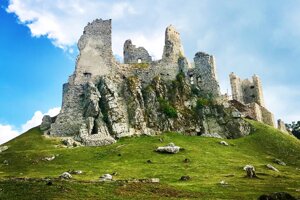 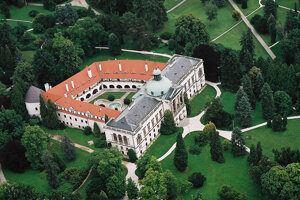 But if you run quickly, nothing bad will happen.

And you can! Each year during the fall.

In November, when the days are shorter, the light is smoother, and the Beaujolais opens your heart and mouth, a unique Château Run starts under Hrušov Castle. In the place where beautiful nature, wine tradition, and the grandness of horse breeding blend.

You will run from the imposing Classicist manor house, through the English park, along the hunting castle, and the racecourse. You will continue to the National horse-breeding farm, where the majestic Lipizzaner will cheer you until you find yourself in front of the castle ruin. Here you will take a deep breath to run quickly back through the romantic vineyards, already established in the 9th century, and end before the manor house.

Not enough? You can continue to Gýmeš Castle! It is located above Kostoľany pod Tribečom village, where you can admire the white Church of Saint George, a simple one-nave church of pre-Romanesque origin, with later Romanesque, Baroque, and modern extensions. It is one of the oldest holy buildings in Slovakia.

Gýmeš Castle was built on the 514 m high Dúň peak in 1253 on the site of an older fort. Originally, two smaller buildings were constructed and joined in the 14th century. From the 15th century, the castle was owned by the noble Forgách family, specifically the unforgettable Casanova of Gýmeš, Duke Carl Forgách.

Legend says guests were welcomed with a “spade dance”. It consisted of four strikes by spade and an inscription in the guest book.

Thomas Garrigue Masaryk spent 10 summers in this region. He liked the mineral springs hidden in the silence of the forests. He rode his brown horse, Hector, he walked under the trees, in the valleys, alone with his thoughts.

It was his comfort zone, which he studied intensely.

Because before we leave our comfort zone, we should know it well. Very well and deeply.

Let's stay there a while longer so that each step beyond it and all thinking outside the box is a pleasure, an adventure, an experience, and a benefit.

Maybe with a glass of Veltlínske zelené in front of the Bison Park in Topoľčianky.