Ukraine should discard the victim narrative. Its success would be a blow to Russia

Ukraine should be proud that their army could stand up against the Russian Federation. NATO did not help Ukraine as much as it helped Afghanistan, says analyst. 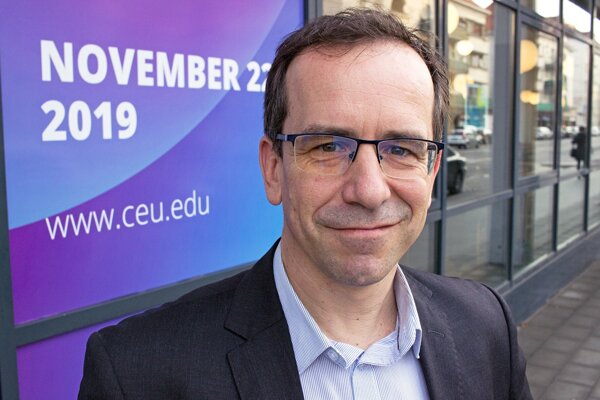 Ukraine should not push the image of a victim on foreign audiences, said DAVID STULÍK, analyst of the Czech think-tank European Values. In an interview with The Slovak Spectator, he describes the much more positive narratives and successes Ukraine can be proud of.

Stulík explains that if Ukraine can become a success story, it will inspire other countries in the region and help battle conspiracy narratives in Slovakia and elsewhere in Central Europe.

The Slovak Spectator spoke to Stulík at the Lviv Media Forum in Ukraine.

The Slovak Spectator (TSS): Last week, the Crimea platform inaugural summit took place. What is the role of the platform seven years after the annexation of Crimea?

David Stulík (DS): The event is important because the problem of Crimea is being forgotten. Ukrainian diplomacy, government and Ukraine as a whole now succeeded in returning the issue to the agenda of negotiations at the international level.

All NATO member states participated, 46 delegations, including key countries like the US, Germany, France and the Baltic countries.

An analyst of the Czech think tank European Values, Stulík has worked for the last 12 years as the Press and Information Officer at the EU Delegation in Kyiv, Ukraine.

Before that, he was shortly employed in the Czech Deputy Prime Minister's Office, where he dealt with preparations for the Czech EU Presidency.

Before joining the public sector, Stulík acted as the Head of Unit for Belarus, Ukraine and Moldova and the coordinator of democracy projects in Eastern Europe in one of the largest Central European NGOs, People in Need.

He also lectured at the Charles University at the Department of Civil Society Sector.

The irritated, nervous, and very critical Russian reactions also indicate that it was a success. If Russia did not care, it would keep silent. Ukrainians took an excellent step in inviting Russia as well. Russia attempted to diminish the importance of the event as much as possible, and organised its own event one week before in Crimea, but it is a diplomatic victory for Ukraine.

Slovakia was represented by PM Eduard Heger, while some other countries had lower-level representations. This has shown how important Ukraine is to Slovakia.

TSS: PM Heger said on this occasion, among other things, that Slovakia will never recognise the illegal annexation of Crimea. How important is Slovakia’s attitude and the attitudes of Central European countries towards Ukraine?