Pope Francis lights a candle for Holocaust victims in Bratislava

Faith must not be used to justify discrimination and oppression, the Pope said. 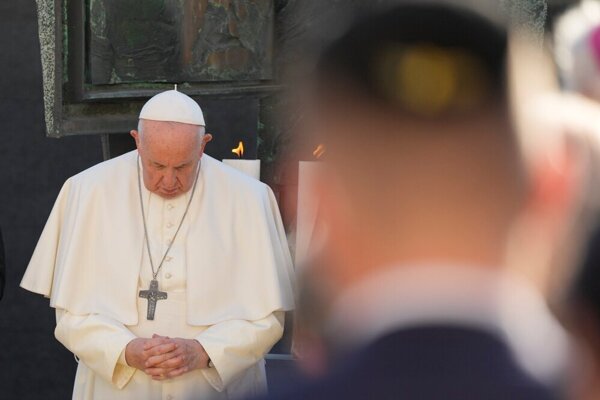 The presence of Pope Francis at the Holocaust memorial in Bratislava is an historic moment for the Jewish community in Slovakia, said head of the Central Association of Jewish Religious Communities in Slovakia, Richard Duda, during the meeting with the Pope in Slovakia's capital on Monday evening.

As part of his programme in Bratislava, Pope Francis met the representatives of the Jewish Community at Rybne Square where a synagogue once stood and is now the location of the Holocaust memorial. The Pope also pointed to the glorious history of the place and of Bratislava's famous rabbi, Chatam Sofer.

Pope Francis and Duda lit candles in memory of Holocaust victims. Slovakia recently marked 80 years since the adoption of strict laws that eliminated Jews from public life in the wartime Slovak state. The Eduard Heger government apologised for the Jewish Code, as the set of laws is known, last week.

The Pope pointed to the proximity of the Catholic church building and the synagogue that once stood on the square, a symbol of the peaceful cohabitation of the two religious faiths.

"Architecture expressed the peaceful cohabitation of two communities, a precious symbol of great importance, an amazing sign of unity in the name of the God of our fathers. Here, like many of them, I feel the need to 'take off my sandals', because I'm standing at a place blessed with the brotherhood of men in the name of the Highest," the Pope said as quoted by the TASR newswire.

"Thank you for the door you opened from both sides. The world needs open doors," he added.

He also said that the site symbolises a dark era in the Slovak history, and recalled the deaths of more than 100,000 Jews from Slovakia.

"We are ashamed to admit how many times the unspeakable name of the Highest was used for indescribably inhumane deeds," the Pope said. "How many oppressors said 'God with us', but they weren't with God."

The Pope called to memorialise the events and for the victims to be preserved; he also called not to repeat history, not to forget the past and not to surrender to the ignorance that finds an excuse for everything, including hate and anger. He stressed that faith must not represent a higher principle to justify discrimination and oppression.