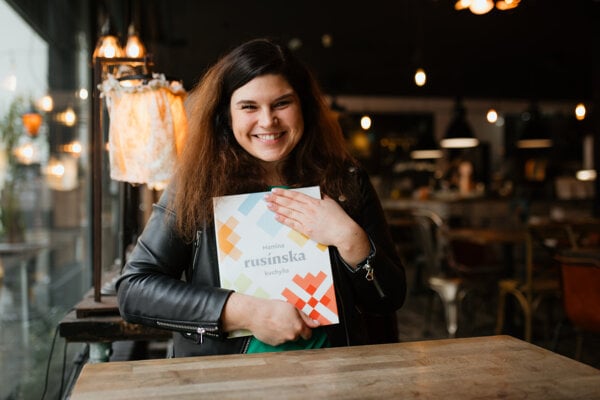 When Oli Džupinková speaks to her audience on Slovakia’s most popular radio station from a Bratislava studio, an unwitting listener would never guess that Slovak is not her only mother tongue.

She also speaks Rusyn, the language of the ethnic minority that inhabits the northeast of Slovakia, including her native village of Pichne, 500 kilometers from Bratislava. Rusyns, a nation without a homeland, live in Slovakia, Ukraine, Poland, and in expat communities in other countries. In Slovakia, they are the third biggest ethnic minority, according to the results of the 2011 census.

Most Slovaks are not really familiar with their culture or language, especially those living far away from the northeast corner of the country. This does not apply to the friends, colleagues, acquaintances, and listeners of Oli Džupinková, who labels herself a proud Rusyn woman. Yet she admits that she only became aware of her Rusyn identity after she left eastern Slovakia and moved to the capital, at the opposite part of the country. Since then, she has embraced the Rusyn identity even as part of a business idea, when in 2018 she published a book of original recipes for Rusyn food as cooked by her mom.

“The book is quite personal because it’s also the story of my family. Besides each meal, you can read short texts full of my memories and experiences,” Džupinková said in an interview with The Slovak Spectator.

The idea for the book emerged when Džupinková’s friends asked her to take them to eastern Slovakia to learn about the environment, culture, and food she would always describe. When they arrived at Pichne, Džupinková’s mother cooked a feast for them.

While her friends were excited about the idea of writing a cookbook, Džupinková had little faith in it. Once everything was ready, Džupinková, along with the photographer and the team, that took part in creating the book, traveled back east.

“My mom cooked 52 recipes over two weekends,” she said. “The photos were taken in our kitchen in our pots, plates, and bowls.”

Rusyn cuisine is simple, regularly making use of ingredients most people have at home and which their ancestors usually grew in the fields, collected in the forests, or that they were able to produce from the animals they kept. Ingredients included potatoes, cabbage, beans, mushrooms, nuts, wild berries, sour cream, and butter. Out of spices, Rusyns usually used just salt, black pepper, paprika, and occasionally chilli.

“It is a very economic and easy cuisine to prepare,” Džupinková noted. Her friends and colleagues often meet at her place for dinner parties, which she says cost her no more than €20 for cream cheese, sour cream, flour, and eggs from which she can cook many meals.

“It is beautiful that our grandparents and ancestors were able to grow everything in their gardens and make products at home. They did not need much, but were still creative; they could cook a lot of various things just with simple ingredients,” she said.

About 3,000 copies of the cookbook have been sold. Džupinková and co-author Peter Šuchtár published the book themselves via crowdfunding. Džupinková said that the cookbook became especially popular outside the Rusyn community. 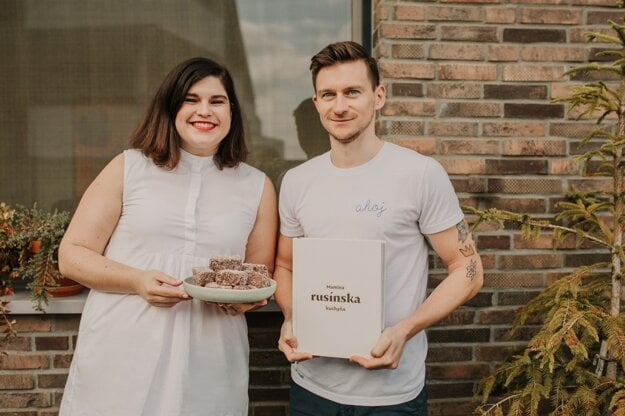 “I received a comment that a good Rusyn homemaker has all the recipes in her head and does not need a cookbook like that,” Džupinková noted.

Anyway, people who were not familiar with Rusyn traditional recipes were able to learn how to cook gugeľ (a baked potato dish), mačanka (creamy mushroom soup), and tatarčane pirohy (pierogis with buckwheat flour).

Džupinková recalls that her friend, who is not Rusyn, stayed in the Czech city Brno for Easter during the lockdown and made meals according to Džupinková’s cookbook.

“It’s the most beautiful feeling, when people who basically have nothing in common with Rusyn culture try to cook the meals and like them,” she noted.

The book is trilingual: Slovak, Rusyn, and English. Džupinková said that they have been shipping worldwide, including the UK, Sweden, France, and the US. The book was often ordered by a person with Rusyn roots in an attempt to show their family the recipes as well as how to cook them.

The Rusyn translation was conducted at Prešov University, the Institute of Ruthenian Language and Culture, into “proper Rusyn language” to avoid using just one of many dialects. Even her parents, who come from different villages, speak different versions of Rusyn language.

While Džupinková speaks Rusyn with her parents at home, her mother would speak Slovak to her as a little child.

“It was really worth it because Slovak language is an important part of my job now,” Džupinková added.

When do you celebrate Christmas?

Growing up, Džupinková did not want to speak Rusyn, she recalls. Only when she was older she did become proud of her roots, particularly after she moved away from eastern Slovakia.

“It was and still is a conversation topic anywhere I go. I explain who the Rusyns are, that they are Orthodox Christians, and people find it interesting that I celebrate Christmas in January,” she noted. This turned out to be handy at the radio station, because it means that she is available for broadcasting on December 24th when all her colleagues want to be home with families for Christmas dinner.

It happened quite naturally that people around her started to be curious about the Rusyn community.

“The pride in my identity was born there,” Džupinková said, adding that her childhood friends and classmates often proudly claim allegiance to Rusyn nationality, pointing to the book as part of their heritage as well.

Via recipes that are part of any Rusyn family’s book of recipes, Džupinková and her co-authors managed to spread awareness about the Rusyns. “With the content of the book, Rusyn culture, history, tradition, and recipes, we succeeded beyond the borders of the community and even Slovakia.”

She does not hesitate when asked about the best place to eat Rusyn food in Bratislava. “My place,” Džupinková laughs. “I think that in Bratislava, I’m the best at cooking those meals. Otherwise, obviously, I would send people to eat at my mum’s, my grandmother’s, or godmother’s.”