Fico reported to be charged with incitation. 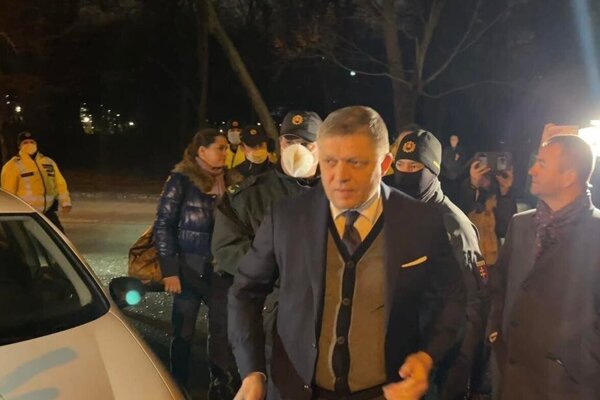 The police brought in ex-prime minister and chair of the opposition Smer party Robert Fico shortly before the planned protest against the government and President Zuzana Čaputová started on Thursday evening, the Aktuality.sk website reported.

This information was later confirmed by Smer spokesperson Ján Mažgút.

It was initially stated that Fico was detained for violating the ban on gatherings, as reported by the Denník N daily.

The police later explained that they did not detain Fico, but merely brought him in. The difference is that a person is detained on suspicion of committing a crime, but when they are brought in, it is merely a tool to, for example, have someone explain something, the police later elaborated, as reported by Sme.

Fico was released after one hour. He told the press that he was brought in for violating the ban on gathering under a national emergency. He also said that he was charged with the crime of incitation. At the same time, Fico denies that he violated anything.

"It is absurd if a member of the parliament, as part of his work, because it is my work, arrives to a place at 6 pm by car. There, the car is surrounded by a group of police officers like it is about some wanted criminal," Fico said, as quoted by Sme.

The protest was to take place at the Tyršovo Nábrežie embankment in Bratislava, in the form of a car procession.

When announcing the protest, Fico said that it would be held in compliance with the measures currently in place, the Sme daily wrote.

About 50 people were gathering for the protest, as Aktuality.sk reported. Shortly after getting out of his car, Fico was approached by two police officers who asked him to go with them. Fico then got in the police car.

"This is what democracy looks like," he said, as quoted by Aktuality.sk, adding they wanted a calm protest through Bratislava.