Not all the losses inflicted by the pandemic can be tabulated

There is no moral to this tale, other than to cherish those you love. 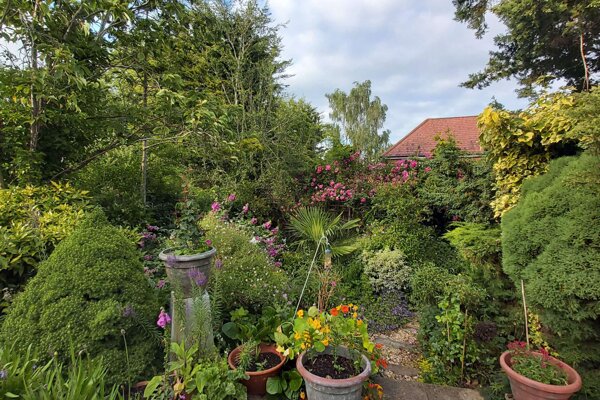 One legacy of my mum's lockdown was the beautiful garden that I could enjoy during my summer in England. (Source: James Thomson)
Font size:A-|A+  Comments disabled

Time has assumed a hazy quality under the last two years of lockdowns, reopenings, mass testing, more lockdowns and general paranoia – this strange, depressing, indefinite period that has been dubbed ‘the languishing’.

The days bleed into one another, and the world looks much the same when viewed through a screen, whatever the season. Without the landmark events of travel or social gatherings, it can be hard to recall exactly when anything happened – was it this year, last year, maybe just a few weeks ago? Did it really happen at all?

In most respects, I count myself lucky: I am able to work from home when I need to, I make enough to live on, I have friends within easy reach. Mercifully, few of them have suffered from Covid, and none of them has died of it.

But not all the losses of the pandemic are direct.

In June, my mother died suddenly in her sleep. I spent ten days isolating in the home where she had lived, piecing together the last days of her life and beginning to grapple with the emotional effects of losing my oldest friend, one I had not seen in person for more than 18 months.

Ironically, I had ‘seen’ more of my mum during those months than at any time since I lived at home: I would often join the daily Zoom call that she had with my sister and her young kids in Hong Kong.

Mum observed the rules rigorously: she spent the first lockdown alone, got her groceries delivered, wore a mask when she had to go out, and was vaccinated at the first opportunity. She was often lonely.

She and her friends began tentatively meeting again only in spring this year, once they had all been jabbed. Things began to look up. An end, of sorts, was in sight.

She had a single objective to sustain her through the pandemic: to stay healthy and avoid the virus so that she could see her grandchildren again.

She wasn’t demonstrative about vaccination: it was just the right thing to do. She was adamant that neither my sister nor I should travel until it was safe and convenient.

But it never was.

One legacy of her lockdown was the beautiful garden that I could enjoy, and do my incompetent best to sustain, during my summer in England.

After her funeral it was there that we held the garden party for her friends that she had been planning before she died.

We had talked about her visiting Slovakia again: she was a fearless traveller and had been many times before, visiting more parts of it than many Slovaks. She cherished the people she met here, but never quite understood why her son would want to live in a panelák.

After a lifetime of work and child-raising, she went to university in her fifties and earned a master’s degree in creative writing. Her favourite Slovak word was ‘slobody’ – not so much because of its meaning, but because she loved the sound of it.

There is no moral to this tale, other than to cherish those you love.

Covid took away the last times we would have spent together, but no one is to blame for that. My mother had a full life, and was surrounded by people who loved her. We miss her terribly.