Alongside defectors united in Hlas, the party would receive votes from more than one third of all respondents, recent Focus poll suggests.

The opposition Smer party is catching up with its rival, Hlas.

Even though the latter, led by Peter Pellegrini and established by the defectors of Smer, is maintaining its lead in the polls with about 18 percent of support, the former would end second with 16.3 percent if the election were held in late January.

Support for Smer rose by 1.3 percentage points compared to November, according to a poll carried out by the Focus agency for the private broadcaster TV Markíza on 1,017 respondents between January 19 and 26.

On the other hand, support for Hlas dropped 1.4 percentage points compared to November. 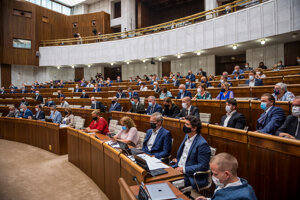 Poll: Support for parties frozen, only extremists on the rise Read more

Focus addressed the respondents at a time the opposition is being quite critical of the defence deal with the United States. Fico and his party mates have been the most vocal, and could benefit from this situation, as the Sme daily pointed out.

Moreover, the two parties that split after the 2020 general election would garner votes from more than one third of all respondents, according to the daily.

Third strongest party in the parliament, as stems from the January Focus poll, would be Freedom and Solidarity (SaS) with 11.1 percent.

This party would be followed by non-parliamentary Progressive Slovakia with 8.3 percent, Ordinary People and Ordinary Personalities (OĽaNO) with 8 percent, and the far-right Republika with 7.8 percent.

Republika, formed by defectors from the far-right Kotlebovci – People’s Party Our Slovakia (ĽSNS), reported a significant increase as well compared to November. The party rose by one percentage point, breaking a record in support.

On the other hand, ĽSNS would remain outside the parliament's doors with 4.3 percent, and so would Alliance, created by several parties, representing the Hungarian minority, which would garner only 4.4 percent.