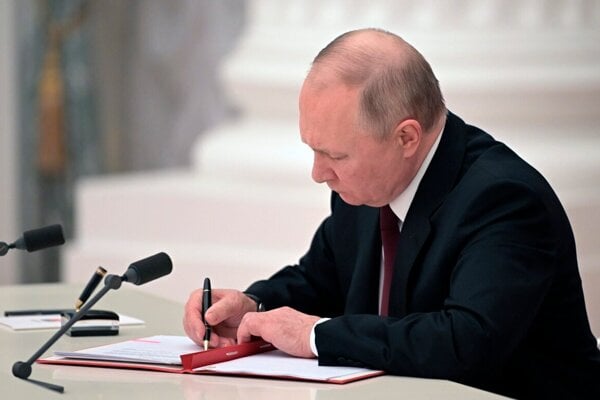 The Slovak Foreign Affairs Ministry stressed this in its official reaction to the Kremlin's decision to recognise two separatist republics in eastern Ukraine, Donetsk and Luhansk.

Russian President Vladimir Putin recognised the two breakaway regions in eastern Ukraine as independent on February 21 and later ordered the deployment of Russian troops to their territories.

Kremlin's decision to recognise the independence of the Donetsk and Luhansk separatist republics is in direct contraction with the declared interest in seeking constructive solutions in diplomatic dialogue, the ministry stated in its first official reaction to the news.

The Slovak diplomacy branded the decision of Putin to recognise the separatist republics as unacceptable and in contradiction with the principle of indivisibility of security, which the Russian government has been calling for.

In his initial reaction on Facebook on Monday night, he condemned the step as well as its creating ground for further violence and hate.

"I respect the prudent attitude of Ukraine, which tries not to give the Russian imperialism an excuse for invasion. It thus protects the lives of Ukrainians as well as Russians," he stated on Facebook.

In an earlier post from Monday, February 21, Heger reported on his call with Ukrainian President Volodymyr Zelensky and reiterated that Slovakia will back Ukraine's efforts to join the EU and NATO.

President Zuzana Čaputová said that Russia’s recognition of the so-called people’s republics "trashes years of efforts to solve the conflict Moscow has created."

"It’s a choice of confrontation over diplomacy and a blatant breach of international law and Ukraine’s sovereignty," she added.