Slovakia had 29 shots on the German net, visibly more than Germany. 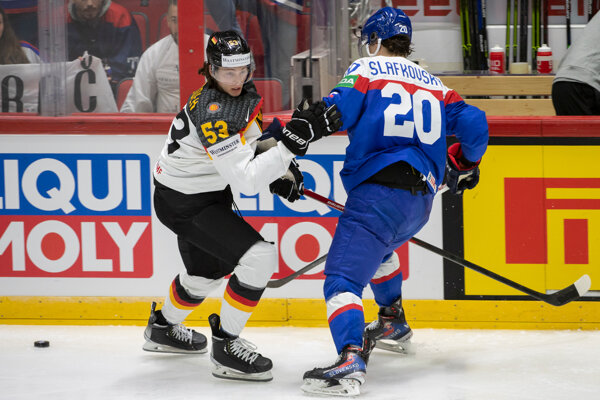 Slovak player Juraj Slafkovský and German player Moritz Seider are fighting for the puck at the world hockey championship in Finland on May 14, 2022. (Source: TASR)
Font size:A-|A+  Comments disabled

Despite having had more shots on net, Slovakia suffered a defeat of 1-2 in the game against Germany on Saturday evening at the world hockey championship in Helsinki, Finland.

Slovak hockey players appeared to enter their second game at the tournament with less zeal than their German opponents. Still, Slovakia had 8 shots on the German net in the first period, which was two more than Germany had. 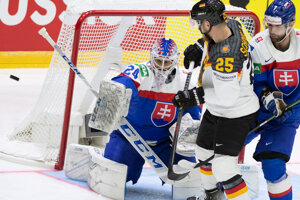 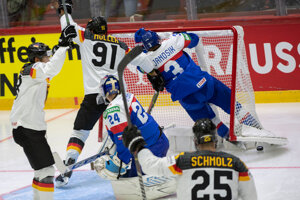 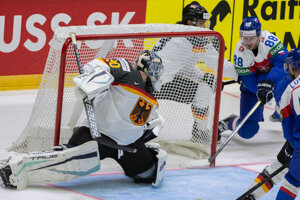 Slovakia’s coach Craig Ramsay decided to make no changes in the team ahead of a meeting with Germany, which lost to Canada 3-5 on May 13. German players shook off the loss and played a more dangerous game than the Slovak team in the first period. Yet, they did not manage to score a goal in Slovak goalie Patrik Rybár’s net.

After Slovakia’s several good but failed chances Slovak forward Kristián Pospíšil slipped the first goal in Philipp Grubauer’s net. However, two Slovaks, Michal Ivan and Daniel Gachulinec, were soon after penalised for slashing and boarding, giving the Germans time and space to score.

They did not make use of their powerplay.

Slovaks, who were not discouraged by two German goals, occupied Germany’s defensive zone towards the end of the second period, even enjoying a powerplay following a penalty for Maximilian Kastner for holding an opponent at 39:26.

Neither did Slovakia manage to score in the powerplay, which ended at the start of the third period.

Germany ended the second period with two goals and seven shots on net. Slovakia had 13 shots and one goal.

Slovaks were under pressure throughout the third period to score at least one goal. They had eight opportunities to score and get back on the horse. None of them worked out. Slovakia even removed Rybár from the ice two minutes before the end of the game, but it did not help.

Slovakia will thus have to wait for another win at the world hockey championship. The last time the Slovaks defeated Germany at the tournament was in 2013 in Helsinki. 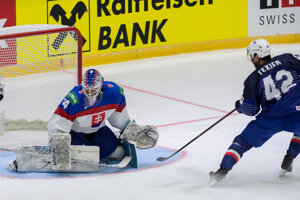 The Slovak Ice Hockey Federation has not said if the player will support the team on Monday.