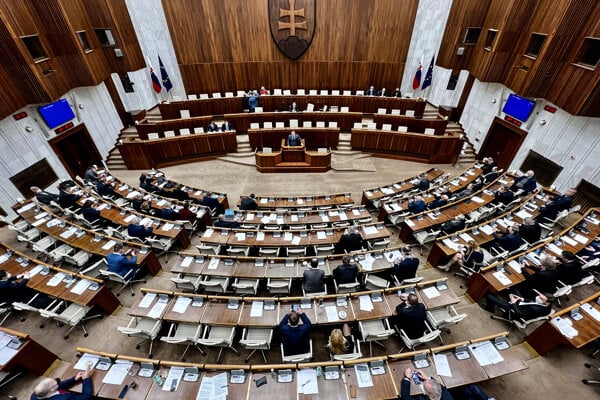 New ministers have been appointed and Freedom and Solidarity (SaS) has returned to parliament, but Slovakia's government is struggling to function properly.

With three of its ministers back in their parliamentary seats, SaS now holds 21 seats in the house. Even though the party said they were going to contribute their votes to open the September session of the parliament, the first one after the summer break, shortly before the session was scheduled on September 13 they specified they would not do so at the first attempt.

"At first we will run a test to see who the minority governing coalition will govern with, where they will look for support to open the session," head of the SaS caucus Anna Zemanová said, as quoted by the TASR newswire.

SaS is testing its former partners

The coalition of OĽaNO, Sme Rodina and Za Ľudí now has 69 MPs in the house. To open the session, more than half of all 150 MPs need to vote to approve the session programme, meaning the government must find at least seven votes among the opposition each time parliament convenes.

On Wednesday September 14, Speaker of Parliament Boris Kollár (Sme Rodina) made two attempts to open the session, but both failed. At the first attempt, 64 MPs were present at the vote while 71 were present for the second vote. Kollár then adjourned the session until Tuesday, September 20.

SaS say they will vote to open the September session.

"We have promised to do so, it is important for Slovakia to ratify the accession of Finland and Sweden to NATO," Zemanová said, as quoted by the Sme daily.

Many points to deal with - and fight over

In this precarious situation, parliament is scheduled to deal with an unprecedented number of draft laws during the September session. The Sme daily reports there are 147 points on the programme, and more than 80 of them are MPs' own legislative initiatives rather than being proposed by government ministers.

Observers believe the increased activity of MPs may be either because they feel the chaotic situation in parliament may be a chance to have their own proposals passed, or because they worry the current parliamentary term may soon come to a premature end and elections called, and want to try to push through their projects before that happens. Sme Rodina caucus leader Peter Pčolinský described it is MPs' "pre-election marketing", according to Sme .

Among the more controversial proposals is legislation to force shops to close on Sundays and a ban on rainbow flags on public buildings (from conservative OĽaNO MP Anna Záborská) as well as the introduction of registered partnerships, including for same-sex couples, from SaS MPs. Sme Rodina MPs want a further increase in child benefits, and a reduction in VAT on foodstuffs for schools, hospitals and social care homes to 5 percent. Meanwhile, SaS wants a cut in VAT on fuels and for restaurants.

Parliament is also scheduled to vote on a proposal by Sme Rodina to amend the constitutional rules governing parliament calling early elections.

An extraordinary session of parliament was held on September 13 for a no-confidence vote in Interior Minister Roman Mikulec (OĽaNO) initiated by the opposition Smer party.

SaS said they would not vote to oust Mikulec, but did not rule out initiating a no-confidence vote in Finance Minister Igor Matovič (OĽaNO). They claim several former and current members of the ruling coalition would back the move.

To oust Matovič, however, the whole opposition would need to back the proposal. While members of the Hlas party headed by former Prime Minister Peter Pellegrini have said they would consider it their duty to vote against Matovič, Smer leader Robert Fico said he would not as it would only pave the way for SaS to come back into government.