WITH the arrival of Dedo Mráz (Grandfather Frost), a tradition prevalent in the Eastern Bloc, winter officially started in Communist Czechoslovakia. The nice, friendly grandpa in the white fur coat with a long beard brought sweets to the "good" children of the working proletariat on December 6. 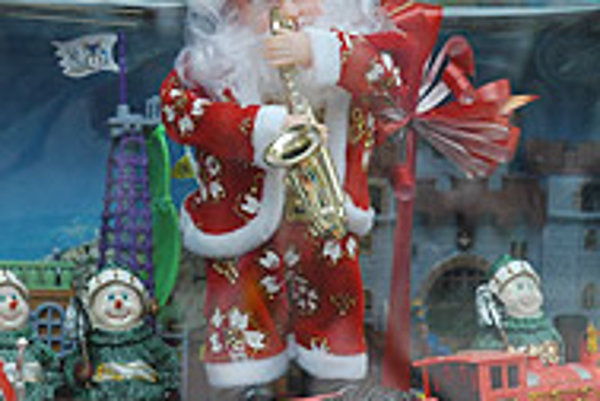 Font size:A-|A+0
WITH the arrival of Dedo Mráz (Grandfather Frost), a tradition prevalent in the Eastern Bloc, winter officially started in Communist Czechoslovakia. The nice, friendly grandpa in the white fur coat with a long beard brought sweets to the "good" children of the working proletariat on December 6.

On that same day, however, the children of families that secretly practised religion awaited sweets from Svätý Mikuláš (St Nicholas), a slim bishop from Minor Asia blessed with generosity. Dedo Mráz came once again on the Christmas Eve, December 24, to bring the Christmas presents. The religious children believed that the gifts were from Ježiško (Little Jesus).

Well, in fact, some atheistic families who did not accept the "ideological grandpa" also awaited Ježiško on Christmas and St Mikuláš on December 6. Other atheists put the idea into their kids' heads that Mikuláš came first and Dedo Mráz later.

And into all that, after the Iron Curtain fell, came Santa Claus.

"I can imagine the chaos children have in their heads. They hear one thing at home and see something else out in the shops," says Roman, 25. "As a child, I couldn't clearly picture the mystical Ježiško in my head. Santa Claus has an advantage in that respect."

Martina, 33, also a toddler in the socialist era, remembers the secret Ježiško bringing presents, Mikuláš' cleaning the boots before putting sweets in as well as Dedo Mráz's obtrusion from the East, and agrees that the traditional images, no matter how they are preserved in families, are now mixed up with the commercial Santa more than ever. Teachers at kindergartens only shake their heads when they see children asked to draw Mikuláš putting a cross on a typical red Santa hat.

Is it really that bad?

"On my way to work and back I carried out a small survey," says sociologist Zuzana Kusá. "The Slovak Post encouraged children to write to Ježiško, even offering his post code. On a small stage in the Aupark shopping mall a sign-post says 'Letters for Ježiško' just next to a message announcing that Santa Claus went to buy reindeers and will be right back."

The coexistence of Ježiško and Santa, Kusá thinks, is possible. She offers an explanation to distinguish them: "The ever present and visible Santa takes the role of a postman and carrier. Ježiško is the one who approves the wishes - he is the invisible chairman of the Board of Directors."

On the other hand, Kusá is fast to add, many Christian families try to exclude Ježiško from the Christmas shopping rush, strictly dividing the Christian and consumerist aspect of Christmas. "If I'm not mistaken, Santa Claus is the commercial figure because religious Americans didn't allow the holy child to enter the marketplace. In contrast to that, the atheist Czech Republic even includes the term ježíšek [little Jesus] into ads - 'go, ježíšku, go'."

The fall of the regime that freed religion naturally caused Dedo Mráz, a figure strongly encouraged by the Communist authorities in order to erase the religious characters from people's minds, survives only in few families or at company parties. The majority returned to Ježiško and Mikuláš. But are those traditions strong enough to withstand the commercial Santa Claus?

Ethnographer Alexandra Bitušíková, who now lives in Brussels, thinks that traditional "winter gift donors" will carry on in many countries despite Santa's wide-spread image. "We have Ježiško, the Germans the Christkind, Belgians Kerstman or Pere Noel, and the Dutch have Sintirklaas. La Befana comes to Italy and the Spanish speaking countries wait for the Three Kings on January 6."

At the same time she points out the fact that only a minority of the world's population celebrates Christmas. The holiday with the winter characters does not exist in Muslim or Jewish tradition. "Basically, the red, commercial Santa is to a certain extent acceptable in multi-cultural societies for all who celebrate Christmas or not. They have the image of Christmas all around and perceive it as a winter entertainment.

"Anyway, in the USA it is not politically correct to publicly wish Happy Christmas, as many don't celebrate it. The safest thing is to say Happy Holidays. Many religions have holidays in winter, so this shouldn't spoil anything," says Bitušíková, who is aware of cases in Brussels when teachers, who prepared Christmas parties with children, encountered problems when parents complained that Christmas has no place in non-religious European schools.

Living now in multicultural Belgium, the ethnographer realises more than ever that Christmas should stay in the family. "And family traditions in Slovakia are still pretty strong," she says, and Kusá adds that she cannot think of a single family who would not want to take pleasure over their children's keen anticipation of Christmas.

"In the end it is the family that decides on who brings the presents," Bitušíková concludes.