Goodbye to the great poet

MILAN Rúfus, one of the most significant icons of Slovak poetry, died in Bratislava on January 11, only a month after his 80th birthday. 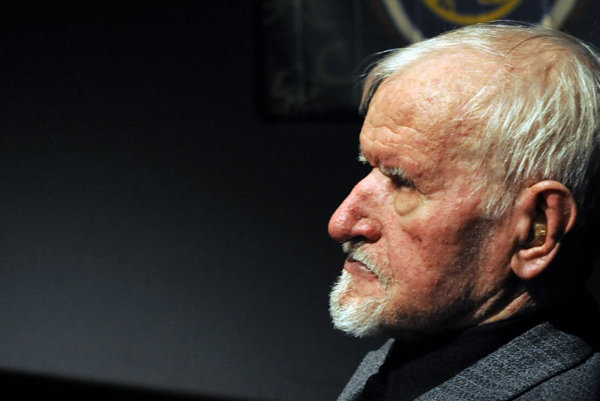 MILAN Rúfus, one of the most significant icons of Slovak poetry, died in Bratislava on January 11, only a month after his 80th birthday.

Rúfus was generally considered to be a cultural and moral authority because he kept raising questions of truth and beauty, the Sme daily wrote. Rúfus wrote about love in both its worldly and divine senses and he was always searching for humanity and truth. Despite their deep philosophical messages, his poems are simple and comprehensible. They reflect his faith in God, in humility and love of life.

Throughout communist times his voice was one of ‘national consciousness’, reminding Slovaks of their own values: Christian morality and affection for their homeland.

Rúfus was born into a builder’s family on December 10, 1928, in Závažná Poruba in the Liptov region, an area stricken by famine in the 1930s, by the second world war in the 1940s and by the communist era soon after. From 1948 to 1952, he studied Slovak and history at Comenius University in Bratislava and he remained there lecturing on the history of Slovak and Czech literature until his retirement in 1990.

After publishing his first poems in journals in the 1940s, Rúfus wrote his first real volume of poetry, Chlapec maľuje dúhu (A Boy Paints a Rainbow), in the 1950s, but it could not be published for political reasons until the mid-1970s. Thus, the Slovak public's first view of his work came in 1956 with Až dozrieme (When We Have Matured), a precocious collection in which Rúfus first invoked the imagery that has since defined his style: bread, wells, springs, crafted wood, bells, children, nature and God. The volume represented a milestone in the post-war poetry of Slovakia as well, mainly due to its unique and non-schematic writing style.

In all, Rúfus released over 20 volumes, dealing mostly with topics of his homeland and his relationship with his daughter, the two pillars that supported his convictions as a poet as well as a human being, Sme wrote.

Through the late 1970s and into the mid-1990s, much of Rúfus's work turned to children, childhood and fairy tales. The most successful of his works for children, Modlitbičky (Little Prayers) were released several times in impressions of hundreds of thousands.

As well as for his poetry, he is known for several major essays and notable translations of Pushkin, Lermontov and Ibsen. In the 1970s, he began writing poetry that accompanied works of art, such as paintings by Ľudovít Fulla and photographs by fellow Liptov native Martin Martinček.

Both his poetry and essays are favourites among readers and have been translated into almost 20 languages.

The first bilingual Slovak-English volume of his poetry, And That’s the Truth, was released in 2007. Another bilingual book of Rúfus’s poems, Niesť bremeno a spievať (To Bear the Burden and Sing) came out last year.

Milan Rúfus received numerous national prizes and awards for his work. The most recent one, the Pribina Cross First Class (Pribinov kríž I. triedy), is the highest state award by the Slovak Republic. It was given to his wife at a ceremony in early January 2009, just a few days before his death.

As for his international recognition, he became the first winner of the Crane Summit Award for Poetry 2008. As part of this award, his poetry will be translated into Chinese, Sme wrote. Rúfus was nominated for the Nobel Prize for Literature three times, the first in 1991.

Milan Rúfus was writing until the end of his life and his death is a huge loss. But, as he said for Sme in an interview in 2007, “a loss is a part of the gift of being, too. And I am also thankful for this gift”.