How the V4 can cooperate to overcome energy challenges

The Visegrad group countries, the Czech Republic, Hungary, Poland and Slovakia, face a major challenge to energy security in electricity and natural gas markets. Although the current economic and financial turmoil has significantly decreased energy demand in the Central and Eastern European (CEE) region, analysts anticipate that demand for electricity and gas will recover over the medium term. Focusing on the region, three major challenges face the Visegrad Group (V4) countries, namely ensuring adequate supplies of electricity, an overdependence on Russian-based natural gas supply and low energy efficiency. 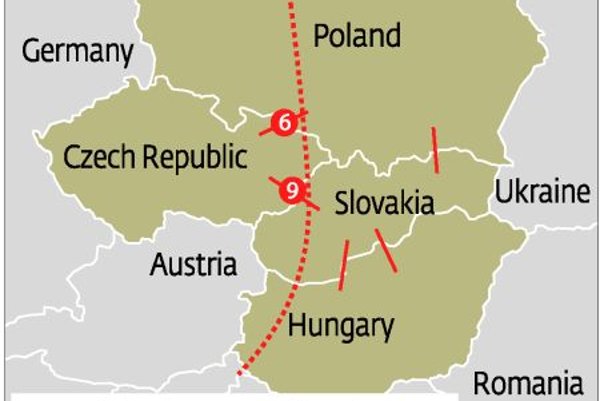 The Visegrad group countries, the Czech Republic, Hungary, Poland and Slovakia, face a major challenge to energy security in electricity and natural gas markets. Although the current economic and financial turmoil has significantly decreased energy demand in the Central and Eastern European (CEE) region, analysts anticipate that demand for electricity and gas will recover over the medium term. Focusing on the region, three major challenges face the Visegrad Group (V4) countries, namely ensuring adequate supplies of electricity, an overdependence on Russian-based natural gas supply and low energy efficiency.

The V4 countries do not have a homogenous power generation mix. Poland and the Czech Republic rely on coal for generating energy (91 percent and 61 percent of the total energy produced, respectively, according to EURACOAL) and face different issues than Hungary and Slovakia, which are highly dependent on imported natural gas. The V4 countries’ portfolio of power generation is characterised by historical underinvestment. The average age of the region’s current generation units is over 25 years.

The result is low energy efficiencies and high utilisation of heavy pollutant fossil fuels. Environmental concerns have been raised due to the high level of carbon dioxide (CO2) emissions and other pollutants.

Countries relying on coal-based power generation, such as Poland and the Czech Republic, are heavy carbon emitters. The enforcement of the European Union’s new CO2 trading regime, planned from 2012, will severely impact such countries. Furthermore, the target for renewable energy resources to represent 20 percent of energy production sets a challenge for all V4 countries and will require an appropriate subsidy scheme and enhanced regulatory framework.

All V4 countries are increasingly concerned and focused on securing energy supplies. The tangible side effects of the recent gas disputes between Russia and Ukraine were widely felt, resulting in natural gas and electricity supply shortfalls across the CEE region. The ramifications of this have increased the emphasis on diversifying natural gas sources as well as alternative sources of power generation. Nuclear power is firmly on the agenda as this addresses environmental concerns over carbon emissions and the provision for large-scale electricity production.

Nuclear power generation, as a share of the total energy production mix, is currently fairly high in Slovakia, Hungary, and the Czech Republic. Additional investments are required to refurbish aging units and to provide additional capacity, while Poland is expected to introduce nuclear generation. All of the V4 countries are considering new nuclear power plant installations within the next 20 years even though implementing nuclear energy generation takes 8-10 years and requires vast investments from both private entities and governments.

While increasing nuclear generation will positively impact emission levels and the security of electricity supplies, it may pose other challenges including: sourcing the required financing; waste decommissioning; and balancing the electricity grids.

The V4 countries must also consider the EU’s electricity market integration incentives when developing their own national energy strategies. This will require close cooperation by the various regional countries and their transmission system operators (TSOs) and the development of cross-border capacities.

Even though electricity markets in the CEE region are better interconnected than gas markets, cross-border bottlenecks still limit the exchange of electricity flows between countries. An increase in the number of cross-border links would support the development of Power Exchanges (PX), the prerequisites of free market competition, and would increase supply security. These spot markets would establish a free market for electricity thus allowing available resources to be used in the most efficient manner while also increasing cross border flows of electricity and further securing supplies.

All regional TSOs, supported by the EU and the newly formed European Network of Transmission System Operators for Electricity (ENTSO-E), have emphasised the priority to increase cross border links.
Progress has been made recently with the completion of new links and others newly announced, but significant additional investments are still required.

Besides the security of electricity supplies, the supply of natural gas is another issue critical for the region.

The supply of natural gas is highly dependent on Russian imports due to the very limited (about 30 percent) as well as decreasing indigenous natural gas production within the CEE region. Gas storage facilities could improve the security of natural gas supplies on a short-term basis. However, in order to secure long-term supplies, transit routes need to be diversified in order to access alternative natural gas sources. To meet projected natural gas demands and to provide security over gas supplies, Europe requires the capacities of all new transit pipelines like the Nabucco, Nord Stream and South Stream.

Although it would be geographically feasible to import natural gas through both Poland from the north or Hungary from the south, the regional interconnections are currently underdeveloped and would not be able to provide gas flows in North-South directions.

As a third challenge, the improvement of energy efficiency is a topical issue in the region. By improving efficiency levels throughout the whole value chain, from generation to consumption, significant energy savings could be realised. The level of possible energy savings are significant and combining energy efficiency with increased investment into the electricity and gas sectors would provide a lasting and meaningful improvement in security for the region’s supplies.

Considering the challenges mentioned above, V4 countries should allocate additional investments to improve regional market cooperation in order to ensure that national resources are better utilised and improve the flexibility and reliability of energy supplies. Numerous projects are focusing on these issues and need to be undertaken both on national and regional levels.

There are regular discussions in the electricity sector between transmission system operators and government energy offices. However, stronger cooperation is still required in order to increase the possibility and efficiency of cross-border trading and to further improve existing interconnections.

An interconnected electricity market could provide increased security by developing a more efficient generation mix across the region, such as shared coal reserves or the interstate development of nuclear generation units. In the case of large scale nuclear or hydro power plants, the parties could greatly utilise economies of scale and save on investment and operational costs.

Besides the effective development and utilisation of the region’s power generation mix, the implementation of organisational frameworks of cross-border trading is another critical issue.
Power exchanges have been established in Poland and the Czech Republic. Hungary is expected to establish a PX either domestically or, as recently announced, by a foreign exchange such as the Prague PXE.

The next step is to interconnect the separated trading platforms to foster a regional electricity market by increasing liquidity. The first real benefits of cross-border PX activities will be seen in the Czech power exchange. The interconnection with Slovakia has already opened and the spot market will be extended to reach Hungary in early 2010.

The V4 countries are committed to diversifying their natural gas supplies by promoting the Nabucco and South Stream projects. Furthermore, the development of a North-South interconnection is also required to take advantage of the additional natural gas sources since the single interconnector between Slovakia and the Czech Republic is insufficient. Similarly to power exchanges, developing natural gas hubs would improve flexibility in the internal gas network and thus improve security.

In the upcoming decade the neighbouring countries plan to expand their interconnections. The completion of a Baltic-Adria North-South gas link is in the joint interest of the V4 countries and will provide long-term flexibility for the region.

Additionally, the V4 countries also plan to cooperate in the development of natural gas storage capacities. Additional storage would provide a buffer when natural gas imports are delayed or suspended. Czech gas reservoirs will also store natural gas reserves for Slovakia as part of the planned cooperation.

Due to the size, cost and time required to overcome regional energy issues, cooperation between states is the only effective way to deal with the challenges. While important steps have already been taken in many areas, close cooperation is still required and would advantage all V4 countries in overcoming the energy challenges expected in the future. The cooperation should include regular and open dialogue between the various energy regulators, synchronising the individual countries’ energy strategies, linking electricity and gas infrastructure to allow uninterrupted flow of energy across borders, promoting power exchanges/gas hubs and, among others, a commitment to joint investments.

There is no single solution to the energy issue but rather a multitude of smaller solutions. It is clear that regional cooperation will be vital, if not essential, for the success of all energy solutions.