Slovakia’s entry into the European Union in 2004 has opened the gates for Slovaks to jobs throughout the union while making the whole administrative process simpler, mainly thanks to the EU-guaranteed right of free movement of people. Yet, entering the international market means that job applicants aspiring for international jobs must play in a different league. Requirements for the qualifications of job applicants from Slovakia are changing and low-qualified people who do not speak a foreign language often have problems finding a job, according to Alena Házašová, a coordinator for European Employment Services (EURES), a European job mobility portal. 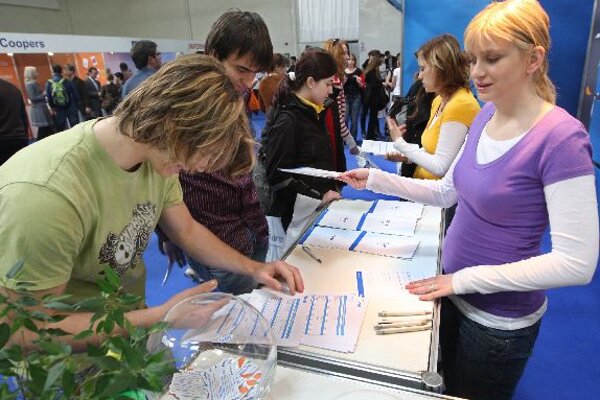 Slovakia’s entry into the European Union in 2004 has opened the gates for Slovaks to jobs throughout the union while making the whole administrative process simpler, mainly thanks to the EU-guaranteed right of free movement of people. Yet, entering the international market means that job applicants aspiring for international jobs must play in a different league. Requirements for the qualifications of job applicants from Slovakia are changing and low-qualified people who do not speak a foreign language often have problems finding a job, according to Alena Házašová, a coordinator for European Employment Services (EURES), a European job mobility portal.

“Since Slovakia joined the EU, the demands for work positions are increasing [along] with a decrease in the [number of] job opportunities,” Házašová told The Slovak Spectator.

Applicants with an active knowledge of a foreign language and work experience have a bigger chance of success, while the number of seasonal jobs offered through the official EU network has dropped in the past few years, Házašová added.

Yet, EURES is not the only option for finding a job abroad, while people who are still interested in finding temporary, especially seasonal, jobs might also use the services of employment agencies.

EURES, a resource for finding work in the EU

EURES is a joint network between the European Commission, the national public employment services and other partner organisations. At the moment it operates in all 27 EU member states, plus Norway, Iceland, Liechtenstein and Switzerland. The network was established in 1993 and is responsible for providing information and enabling cooperation among its members in order to help make the free movement of workers a reality. It also “promotes the mobility of workers and reduces barriers to mobility by contributing to the development of a European labour market that is open and accessible for all, ensuring the exchange of vacancies and job applications and transparency on labour market information”, reads the official EURES website.

EURES works with so-called EURES advisers, who have specialised training and who provide information and advice about all issues related to free movement. These services are offered free of charge to all persons benefiting from the freedom of movement in accordance with EU law, the official website informs.

At the end of November 2012 the European Commission adopted a EURES reform which is intended to help the portal respond directly to specific economic needs in order to “proactively match jobseekers and job-changers to current job vacancies”, according to the official press release.

Moreover, the reform aims to simplify contacts between jobseekers and employers looking for particular skills, to focus on sectors and occupations with skills shortages and to support targeted mobility schemes for young people “who have a higher propensity to be mobile, and cover forms of employment that combine work and learning opportunities, such as apprenticeships”, reads the official EC press release.

Slovakia has its own EURES advisers who work at 46 labour offices around the country. They help more than 3,500 people find jobs in EU countries every year, Házašová said.

In addition to offering information about job opportunities in EU countries, the advisers offer various consultant services. They provide information about living and working conditions in EU countries, the situation on the labour market and finding work outside the EURES network. Agencies also prepare jobseekers for job interviews and teach them how to write a curriculum vitae, Házašová added.

When it comes to countries that Slovaks are interested in, Házašová lists German-speaking and Scandinavian states, as well as the Czech Republic and Great Britain. The most common jobs are in the hotel business and gastronomy, industrial production, construction, transport and warehousing and the health-care sector.

Other avenues for finding work

Another way to find a job abroad is to use the services of employment agencies, which provide people mostly with temporary and seasonal jobs. These agencies have their own agents who discuss work opportunities with jobseekers and help them to find a job. The agencies often help clients with arranging their trip and provide contacts for the new employer. Unlike when using EURES, people have to pay for such services.

When it comes to Slovak job preferences within the EU, Lucia Henčelová from Universal Consulting employment agency says that during the years 20042005, jobseekers were most interested in working in Great Britain as well as coastal Mediterranean countries, such as Greece and Cyprus.

This could have been influenced by the fact that other countries at that time had fewer opportunities, so people were responding to the countries that were more or less on offer, Henčelová told The Slovak Spectator.

She added that later, preferences changed, and people started looking for jobs in countries closer to Slovakia, like the Netherlands, Germany and Austria. At the moment the trend is changing again and their clients are showing a renewed interest in Great Britain.

On the other hand, Žaneta Uhlerová from Coolagent employment agency says that after Slovakia joined the EU, nothing has really changed in terms of the preferences of their clients. They are still interested in countries like Great Britain and Spain, she told The Slovak Spectator.

Be aware of scams

Yet, people using the services of employment agencies should be aware of fraudulent agencies trying to take advantage of jobseekers. Most recently, the Hospodárske Noviny daily reported on January 16, 2013 about the case of several women who were tricked by the Bratislavabased company Kraft Personal. The agency set the women up with a job at a farm in Austria. In addition to their salary they were to receive additional money for food, but the women later said that they received neither the subsidy nor their wage. Moreover, they typically had to work 16 hours a day in what were often inhospitable conditions, Hospodárske Noviny wrote.

“People should know exactly which company they will work for and under what conditions,” Henčelová told The Slovak Spectator.

A good indicator of a legitimate agency is the length of time that it has been operating on the market, since “a long existence means seriousness and stability”, Henčelová stressed. She added that it is also a good idea to visit the agency and meet the agent in person to find out “more about how the company works and what it can offer to the job seeker”.

Uhlerová adds that people should check to see whether the mediating agency has a valid license and whether it cooperates with the Central Office of Labour, Social Affairs and Family (ÚPSVaR). The reason is that the ÚPSVaR checks all agencies mediating work abroad and issues regulations for them.

If people discover that an agency has failed to arrange the work that it promised, they should ask the agent to acknowledge the error and return the payment he/she paid for finding the job. If the agent refuses to cooperate, people can submit a complaint to the ÚPSVaR, which will most likely investigate the agency’s practices, Uhlerová said.