PRIME Minister Robert Fico promised to uphold the deadline for submitting a lawsuit regarding the Council of the European Union’s decision to redistribute 120,000 migrants among EU member states on a quota basis to the Court of Justice of the EU. 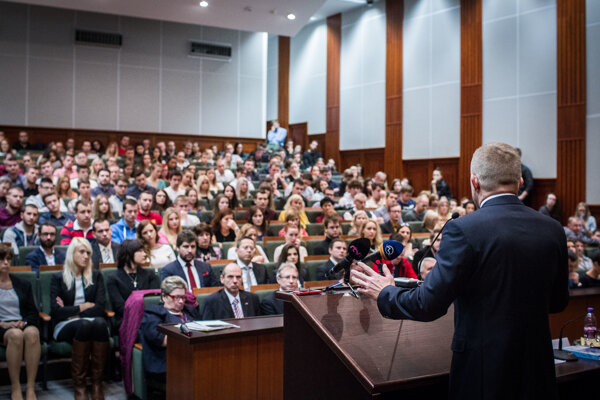 He said so during his visit to the Pan-European University where he discussed the European migration crisis with students. Political analysts, however, consider it part of his pre-election campaign. Schools, however, should remain apolitical, the Sme daily wrote.

“We’re currently processing expert details, the deadline for lawsuit submission is December 18 and it will be upheld,” Fico said, as quoted by the TASR newswire, adding that he possesses internal information that other EU-member states plan to join Slovakia in their lawsuit. He specifically pointed to Hungary and Romania.

He reaffirmed the cabinet’s stances and contributions towards resolution of the migration crisis. Slovakia still insists on separation of economic migrants from those who are fleeing from war and hunger, he said. Furthermore, he again called for stronger Schengen border protection.

Fico has also expressed his views on the current situation in countries from which refugees are fleeing, mainly Syria.

“We support all steps concerning military advances against Islamic State,” the PM stated, as quoted by TASR. The most powerful states of the world must agree on a common military approach to combating IS, just as they need to agree on Syria’s future form of government, he added.

Most of the law students addressed by Sme identified with the government’s approach to the migration crisis.

“If the prime minister wanted to communicate the governmental measures to fight the crisis, he could have summoned a press conference, and not have visited students,” Mesežnikov told Sme.

Jaroslav Ivor, dean of the Pan-European University’s Faculty of Law, however, denied the claims, saying that the campaign has not officially started yet.