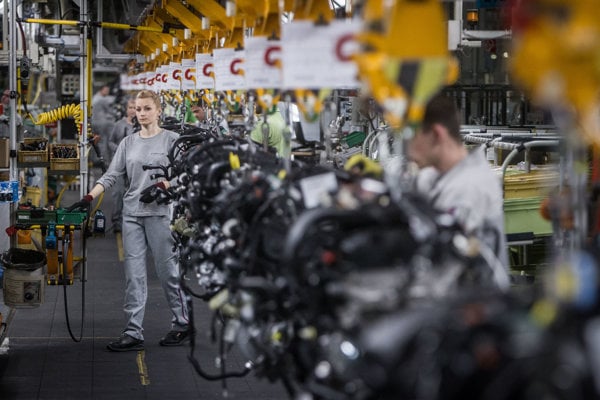 Temporary contracts have kept people at work and reduced the administration and payroll costs of the companies, but they have also normalised a flexible work force and endanger career stability.

Such contracts see workers sign a contract with a personnel agency, but work for a third party employer. They have been typical in the manufacturing sector since the 1990s but now companies use temporary recruitment also in IT and development.

“The agency provides quality personnel and the company can focus on the core business,” said Martin Huba, country manager at Synergie, adding that typical clients are fast growing companies and firms new to the market. “Local agencies have a better overview of the market than the foreign investor.” However, the young people who entered the world of work through temporary employment cannot rely on stability in terms of income and career growth. When the company has to cut costs, they are the first ones to leave.

In 2015, more than 10 percent of the active labour force was employed via agencies. The main reasons were the inability to find permanent placement. According to the statistics from the Ministry of Labour, Social Affairs and Family, the largest groups were people with full vocational education with or without a secondary education diploma (35 and 33 percent respectively) and majority of the workers were contracted in the service sector (72 percent).

Personnel leasing is used everywhere where employers must deal with a fluctuation in their labour force or cannot predict the volume of work. It brings an additional value for the custom employers but also blunts their incentive to care about the well-being and development of their workers.

“In recent years many employers have approached it as a way to lower the costs of contracting employees, which impaired the conditions for workers,” Stuška said.

In 2014, the government prepared changes in legislation that amended rules of temporary work in accordance with the practices in the EU.

“The legislation offers higher protection and more rights for the workers,” said Stuška. “It includes equal working conditions and wages as the permanent staff who do the same work.”

The changes should address the problem of temporary allocation, when companies hire staff from the agencies for a short period, knowing that they will release them after the peak in demand.

“Agency staff must be given a notice period or the agency must negotiate termination of contract with a severance package,” Stuška said.

In the past, some illegal agents paid workers in cash and saved money on the tax. Therefore the law also amends the criteria for operating an agency.

“Agencies often can provide the employees with better conditions than direct employers, without increase in employee-related costs for the employer,” said Huba, adding that this creates space for the economy of scale.

The agency registers the employee with social and health insurance, tax office and also provides medical checks, food and education on safety. It takes over all administration, which lowers the personnel costs of the employer.

According to Turček, personnel leasing does not have any negative effects on the employment rights of the people.

“Temporary assignment is a form of full-time employment, but the salary is paid by the agency – not the employer,” he said.

While it is difficult to completely eradicate abuse of the workforce, discrimination in terms of salary and the lack of stability that comes from the temporary character of the contract, the disadvantages for the employees were addressed by the amendment to the law from 2014.

“Working via an agency is more beneficial than working via a so-called work agreement [dohoda], as it gives the worker more rights and competences,” Stuška said. Comparison with self-employment (živnosť) is irrelevant, because it cannot be used by contracted workers who have the status of contracted employee (dependent work), he added.

“Personnel leasing can increase the employability of the people because it facilitates the process of taking on new personnel,” Huba explained, adding that it can help with their adaptation to the work environment.

In 2015, 30 percent of the employees from Trenkwalder were offered direct contracts with their companies.

“Personnel leasing is the gateway to a new job for many people,” said Jana Mesárová, the executive director of McROY Jobliner. The most sought after professions are production operators, forklift drivers, quality controllers, warehousemen, cashiers, seamstresses and sales representatives.

Agency workers are used for filling temporary vacancies (during sick leave or maternity and paternity leave).

Companies usually look for skilled professionals, who can fulfill a specific task, for example graphic design or software development. However, in the IT sector the employers prefer outsourcing, which offers greater flexibility for both sides, and employment leasing is used only in specific situations.

“IT positions are usually supplied for project teams,” said Turček. “If the company does not have IT listed in the type of business, personnel leasing is often more beneficial than paying a programming company.”

But personnel leasing largely seeks to bypass complicated hiring laws that can make firms hesitant to bring workers directly so as to not commit to paying out longer term benefits.

“The main disadvantages for the employer are missing loyalty to the company, which can affect the motivation of the temporary staff, fluctuation of the workforce and often workers that do not have the required qualifications,” said Stuška.