The route will connect eastern Slovakia to the world. 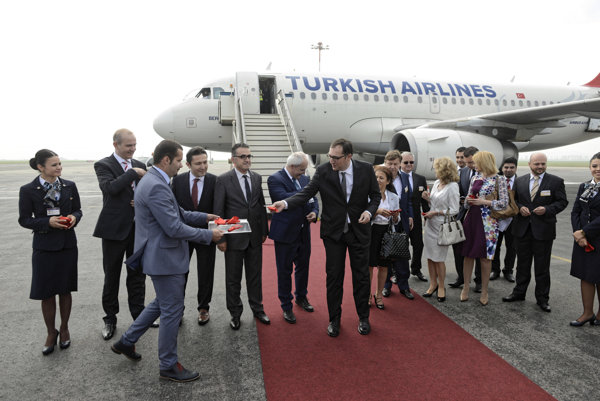 A new Turkish Airlines’ regular flight from Košice to Istanbul has been established at Košice Airport since June 15. The flight is designed to serve as a connection to other world destinations and will operate three times a week.

“As Turkish Airlines, we give a particular importance to Košice, considering its strategic, cultural, historical, commercial and touristic significance and thus the passenger potential to enable to feed our global network,” said Fatih Cigal, vicepresident of Turkish Airlines for sales in Central Europe as cited in a press release by Košice Airport. “We are glad to take such a big step in the connection of eastern Slovakia to the world.”

The airline and the airport have been working on the project for four years.

“It is a great milestone because now we have 115 further destinations accessible via one landing stop in Istanbul,” said Košice Airport director Michael Tmej as cited by the TASR newswire. “This means that with a single transfer, the whole world is within your reach. It is great for tourism and the airport itself.”

Mário Németh, general director of the civil aviation section at the Slovak Ministry of Transport, Construction and Regional Development added that the opening of the Istanbul connection with Turkish Airlines is an important step for whole region of eastern Slovakia.

“New opportunities are opening not only for tourists, but especially for business people and investors from all over the world,” said Németh.

If there is demand on part of passengers, Turkish Airlines will add further flights.

“One of the goals of Turkish Airlines is to fly from Košice seven times a week, if the demand is there to back it up,” member of the Košice Airport board of directors and deputy executive director Tomas Jančuš told TASR, adding that talks with the airline were difficult. “We tried for a long time to add one of the most reputable companies and a transit airport that connects to the entire world. It is Istanbul that serves as a global traffic hub.”