The parliamentary session to hold a no-confidence vote in Prime Minister Robert Fico, postponed from July 6 to July 7 due to the lack of quorum was suspended until further notice by deputy speaker Andrej Hrnčiar. 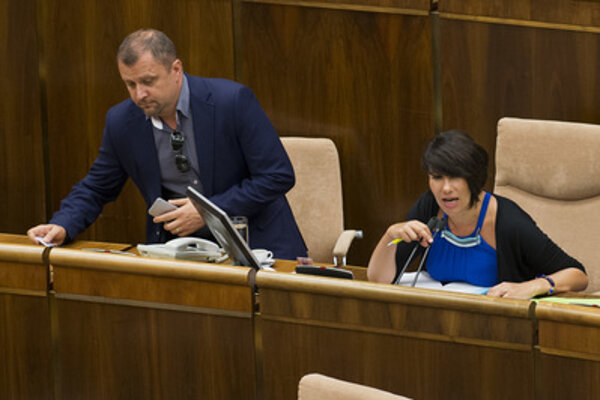 Deputy speakers Hrnčiar (L) and Ďuriš Nicholsonová argue over who shall preside over the parliamentary session on July 7. (Source: SITA)
Font size:A-|A+0

The extraordinary parliamentary session started on Thursday without the presiding Lucia Ďuriš Nicholsonová (Freedom and Solidarity-SaS) counting the number of MPs attending through the voting device. She argued, according to the website of the Sme daily, that if there are 76 MPs present, the session can start.

It turned out, though, that there were only 69 deputies present at 9:00, and thus Hrnčiar postponed the opening by one hour. At 10:00, Ďuriš Nicholsonová decided, based on the attendance list, that there were 82 MPs in the auditorium. MP Róbert Madej of the ruling Smer party opposed her, saying that she decided based on what her party colleague Ľubomír Galko shouted. Also Most-Híd MP Gábor Gál objected that the only right way to count MPs present is through the voting device. A dispute concerning the way of counting votes flared.

MP Miroslav Číž of Smer accused Ďuriš Nicholsonová of leading the session in an unauthorised way, as deputy speakers have to be authorised by the Speaker of Parliament, SNS’ Andrej Danko. Originally deputy speaker Hrnčiar (Sieť) was meant to lead the session but Ďuriš Nicholsonová allegedly agreed with him that she will replace him. Hrnčiar denies this.

Later, Ďuriš Nicholsonová showed journalists a schedule of the session she found at the speaker’s desk: the session was planned to open at 9:00, be postponed due to lack of quorum for an hour, and then concluded. Officially, there were 94 MPs in the parliament building, and 82 in the auditorium. She claims they had planned in advance to be in parliament but not to vote.

MPs had already tried to recall PM Fico on July 6 but due to the lack of quorum, the extraordinary session was delayed to the next day, according to Sme. Opposition proposed the no-confidence motion due to the PM's firm support for Interior Minister Robert Kaliňák. 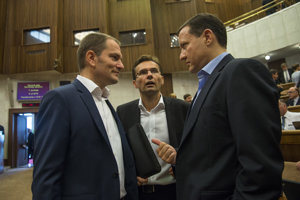 Also on July 6, an attempt at a no-confidence vote in Kaliňák was postponed until September, allegedly not to disrupt the events connected with Slovakia’s Presidency of the EU Council. Kaliňák is allegedly involved in shady deals with businessman Ladislav Bašternák, originally investigated for VAT frauds but then acquitted.