Last protest in front of Bonaparte has taken place

At the parliamentary session starting on Tuesday opposition deputies will try to express no confidence in PM Fico and Minister Kaliňák. 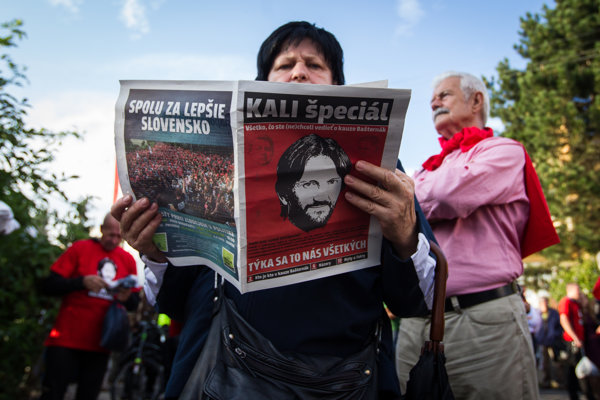 The last protest at which the leaders of the opposition parties SaS and Ordinary People/Independent Personalities-NOVA (OĽaNO-NOVA) Richard Sulík and Igor Matovič, respectively, gave speeches, drew about 300 people.

“We have shown that even though the coalition ignores the rules in such a harsh way , the Bašternák – Kaliňák case has certainly not died away,” said Sulík as cited by the SITA newswire. “The pressure from the  opposition side during the summer was really strong.”

He thanked people for their support and reiterated that PM Fico should not live in a complex built from stolen money.

Fico lives in a private flat rented in the Bonaparte residential complex belonging to businessman Ladislav Bašternák, who is suspected of tax fraud. The opposition parties SaS and OĽaNO-NOVA allege that Kaliňák provided cover for Basternák when he was being investigated by the police.

The main reason for the rallies was that Speaker of Parliament Andrej Danko interrupted special parliamentary sessions devoted to expressing a no confidence vote in Fico and Kaliňák, at odds with the constitution and rules, claims the opposition.

SaS and OĽaNO-NOVA have organised the rallies regularly since June 20 in Bratislava and other towns of Slovakia. Numbers attending the rallies ranged from about 300 to more than 3,000 people. 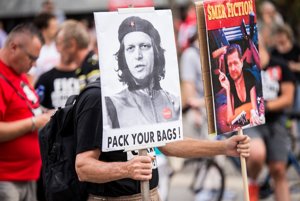 Read also: Last but one protest in front of Bonaparte drew 300 Read more

Again Alena Kpempaská, organiser of Gorilla rallies, with her supporters turned out at the rally too. While they agree that Kaliňák should ponder his resignation, they claim that coalition and opposition politicians are equally alike.

KALI Špeciál not distributed yet

In the meantime the Slovak Post has refused to distribute KALI Špeciál, a special newspaper devoted to the Bašternák case, to Slovak households even though the opposition had an agreement with the Slovak Post. It argues that one of the obstacles to do so is an unresolved question as to whether it is a periodical or not. Slovak Post was afraid that if KALI Špeciál were recognised as a household leaflet, it could be held legally accountable for its content.

The Culture Ministry earlier on August 31 delivered a statement to the Slovak Post claiming that KALI Špeciál does not feature some required data, including the name of the publisher, date and year of issue and the International Standard Serial Number (ISSN).

The Slovak Post can refuse to distribute a periodical only for specific reasons stated in the relevant laws, said MP Jozef Viskupič (OĽaNO-NOVA). This does not include insufficient registration of a periodical, said Viskupič, calling Slovak Post’s and the Culture Ministry’s moves as ‘censorship’.

“The absence of data on the publisher does not provide a reason to refuse to distribute a periodical,” said Viskupič. “It’s only an administrative dereliction coming under the remit of the Culture Ministry, while such a dereliction emerges only when the distribution of the periodical without the mandatory data has already taken place.”