Marian Kotleba’s the far right party ĽSNS has already won two trademarks; thus, nobody else will be allowed to use them, not even in jest. 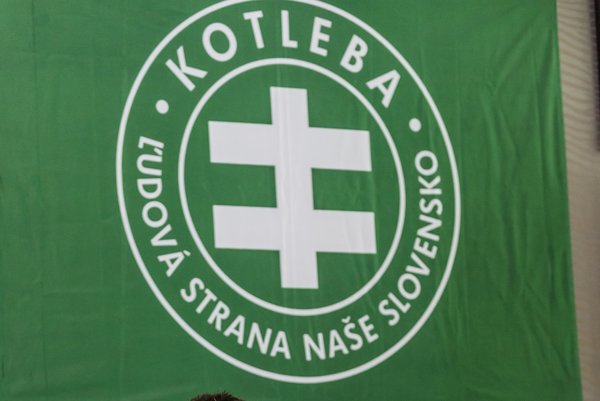 These two are verbal but four more, now in the process of being approved by authorities, include the double-cross used by the Nazi-inclined World War II-era Slovak State.

The party received protection for their name and the name of its chairman so from now on, the words and phrases Kotleba – Ľudová strana Naše Slovensko (People’s Party Our Slovakia) will not be allowed to be used by anyone else, not even in verbal jokes and wordplay appearing on T-shirts like

No one else can use the same or a similar name for goods and services without asking for their approval, patent representative Lenka Litváková told the Sme daily. Apart from fines, prison sentences of up to five years can be given to those who violate this rule – if the court finds that the trademark owner has been seriously harmed. “In fact, they have monopolised the use of this phrase,” Litváková explained.

The Marian Kotleba’s party filed a motion with the Slovak Industrial property Office (ÚPV) last December, demanding protection for hundreds of issued items: from T-shirts and balloons, through watches, beer glasses, stamps to accommodation services. The extremists mostly use the name on the T-shirts or hoodies they wear during their propaganda train rides, concerts or gatherings.

In December, they also asked for four more trademarks, for four different variations of their logo, including an equilateral double-cross and the title Kotleba – Ľudová strana Naše Slovensko. Three of them are black-and-white; one has a green background.

So far, they have failed to receive a trademark for them.

Already in April, doctor and associate professor in criminal law, Peter Kováč, contested their request for trademarks at the ÚPV and opined that the party cannot register such logos. He noted, as cited by Sme, that the equilateral double-cross – a part of the ĽSNS logo – contradicts good behavior. Actually, the identical double-cross was used by the paramilitary Hlinka guard in the time of the totalitarian Slovak State, a satellite of Nazi Germany. The main state consultant for heraldics, Ladislav Vrtel, recently pointed to the undeniable message of the double-cross, connecting it with Nazism.

The authority asked ĽSNS for a stance the party recently sent; but ÚPV refuses to publish its contents. “It’s also not possible to estimate the deadline for the handling of the request,” Eva Galátová of ÚPV told the daily.

Kováč noticed that a refusal by the office would be a breakthrough, and also the first official stance confirming that the equilateral double-cross is an extremist symbol. This would be a precedent for court cases as well, Kováč added.

If the ÚPV refuses to register the trademarks with an equilateral double-cross, this would probably have retroactive effects for ĽSNS. The party would probably also use the so-far registered trademarks for the old logo.

ĽSNS is currently facing the threat of being dissolved by the Supreme Court, or of its activities being banned. General Prosecutor Jaromír Čižnár filed the proposal.