The policeman, the mailman, the Aryanizer and the villager helped people from Bardejov escape deportations. 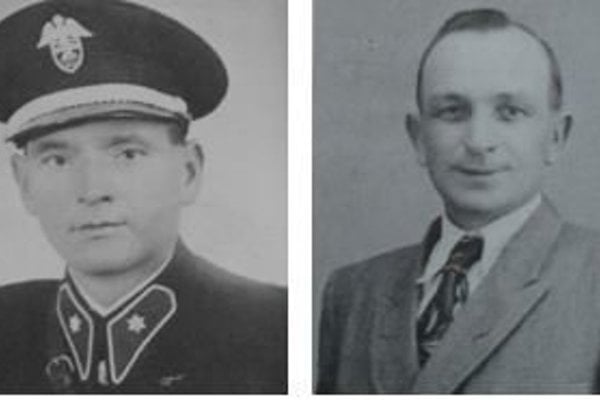 Adam Bomba, a police officer from Bardejov, used his familiarity of the town to help many local Jews to escape and move between several hideouts, including his own house. As an avid hunter, he was also very familiar with the local woods and, together with his 17-year-old son, he guided Jews from Bardejov to safety in nearby villages.

Bomba helped to protect, hide and feed the Schöndorf and Korn families. When the situation became too dangerous to remain in Bardejov, he moved them to a nearby village of Zlaté. There, they were hiding with the help of Mr. Bomba’s sibling for another two months. The families eventually fled to the western part of Slovakia and saved themselves.

Bomba also helped Abraham Grussgott to obtain fake identity documents under the name Juraj Šima and later he escorted him to a cellar at Bardejov town square. The cellar previously belonged to Shlomo Neuman but got into the hands of Štefan Tarcala. Grussgott remained hidden in the cellar for the rest of the war and survived.

He later wrote that Bomba knew about every single Jew in town and helped Jewish refugees from abroad after 1940. Bomba knew about all the Jews hiding in shelters. Furthermore, he made sure that the Jews’ valuables would remain safely concealed until the liberation.

Witnesses report that on several occasions Bomba intervened to stop Hlinka Guards from beating Jews, and that he helped to save Jews in a transport wagon at train station by opening the wagon and allowing them to escape.

Abraham Grussgott believed Jozef Kisel, a mailman, had access to letters addressed to the government and thus knew who was marked for deportation to Auschwitz. He used this knowledge to warn the doomed victims that they should flee and hide. He also provided a temporary hideout in his home. Grussgott reports that Kisel concealed him in his home for one night and then helped to transport him to an abandoned attic in Simcha Schlüsselfeld’s apartment. Kisel also helped Grussgott to get in touch with Adam Bomba, who then took him to Neumann’s cellar.

Štefan Tarcala helped several Jews who were hiding in the cellar at Moshe Neumann’s house and store in Bardejov town square, by providing them with food, supplies and protecting them until the end of the war. Tarcala was a so-called ”aryanizer”, who had taken over the property of Moshe Neumann. Through an exemption, Neumann had escaped the early deportations, but when the Germans came to round up all the remaining Jews in 1944, Tarcala hid the Neumanns in his cellar.

Several other Jews were also hiding in the labyrinthine Neumann-Tarcala cellar, including Abraham Grussgott, Leibish Friedman, Abraham Kurz, Salamon Leib Unger and Etta Abramowitz. The Jews stayed put during the days and in the evenings Tarcala opened the cellar to let them out to breathe some fresh air, to void themselves, etc.

When the Soviet Army liberated Bardejov on 20 January 1945, these seven Jews could finally freely leave the cellar.

As noted in the official chronicle of the village Hrabské in the Bardejov district near the Polish border, Vasiľ Kyjovský saved at least three Bardejov Jews, including Abraham Grussgott, by hiding them in his house in Hrabské. Grussgott also reports that Dr. Tibor Welles, his mother and Otto Wahrman were hidden there from September 1944.

Grussgott also reports that Dr. Weiss and her husband and children were able to hide in Hrabské as well—but it is not clear if they hid in Mr. Kyjovský’s house.

In November that year, Kyjovský was denounced by local villagers and, along with Grussgott, Welles and Wahrman, he was detained by the Gestapo. The three Jews escaped from Prešov imprisonment, and Grussgott and Wahrman survived until the end of the war.