New PM Pellegrini's earnings and expenses do not match

Dennik N looked at Pellegrini’s income since 2005 and questions his purchase of a luxury apartment on the Danube embankment. 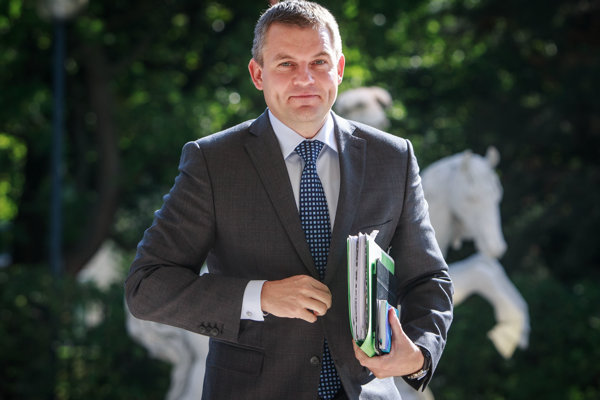 The new Prime Minister, Peter Pellegrini of the ruling Smer party, recently bought a flat in a luxurious residential complex on the banks of the Danube River, but cannot clearly prove how he procured the necessary funds to finance the purchase.

Pellegrini paid €245,000 for this 90-square-metre flat in the Zuckermandel development complex and will continue paying the rest of the price, €165,000, through a mortgage, the Denník N daily wrote on April 3. The daily analysed publicly available data about Pellegrini’s income and expenses, claiming the new PM spent much more than his publicized income. The daily uncovered some discrepancies when checking all his available incomes

Only income from public offices

Unlike some of his colleagues, the incumbent PM has been paid solely by the state since 2006, while having no secondary income from business or other sources.

Apart from ordinary income, he admitted to the daily that he has received some more than tens of thousands of euros via capital gains. Pellegrini could have received this sum only if he'd had hundreds of thousands of euros on his account, but he did not explain how he acquired the sum. He has not even stated the specific amount of his property disclosure since the law does not require it.

Closer scrutiny of his income and expenses pointed to around €100,000 more on the expense side.

The premier explains this by citing “other income than from his official position" – not required by law to be stated in his property disclosure filed with the parliament.

“However, he stated them naturally, in his tax return, and the prime minister has paid all due taxes as required by law,” Pellegrini’s press department wrote to Denník N. “These is mostly income stemming from the sale of his car, bank asset returns, resources from his family, etc. This income enabled the prime minister to acquire savings through which he co-financed the purchase of his flat.”

Moreover, Pellegrini bought the flat in Zuckermandel when he was Deputy PM for Investments, defended the state relief for “strategic investments” of two developers, J&T and HB Reavis, in Bratislava. So he may have saved dozens of millions of developers’ money on taxes, Dennik N wrote. Zuckermandel is a project by J&T Real Estate.

The new PM also owns a new flat in Banská Bystrica and a luxury weekend house at Králiky (both financed via a mortgage) and a hectare of farm land near Zvolen. He has a weakness for luxury cars, watches, suits and his hobby is amateur piloting.

The parliamentary committee for incompatibility of functions may now dig more deeply into the property situation of Pellegrini, since the head of this committee, Vladimír Sloboda (opposition SaS) told Denník N he would file a motion. The PM will have to explain, in oral or written form, the questionable issues in his property.