Opposition deems this step intimidation of deputies that threatens their freedom of speech in parliament. 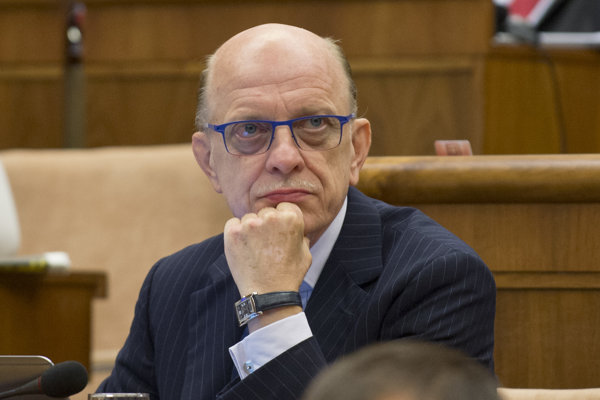 A court has ruled that MP Alojz Baránik (opposition Freedom and Solidarity/SaS party) will have to pay €200,000 to judge Ayša Pružinec Erenová for statements made about her in parliament, representatives of political parties SaS, Ordinary People and Independent Personalities (OĽaNO) and Sme Rodina (We Are Family) announced at a joint press conference on July 2.

"Disproportionate fines issued to MPs for their statements in parliament serve as intimidation, not compensation to the aggrieved," said opposition leaders, as quoted by the TASR newswire.

“This amount of money means economic ruin, but mainly it’s intimidation of MPs while they are carrying out their mandates,” SaS chairman Richard Sulík said, according to TASR.

“The court has denied that it’s an MP’s right and duty to express their opinions in parliament in accordance with their beliefs. The immunity for statements that MPs deliver in parliament is important for the proper performance of their work. Criticising and pointing out missteps is a fundamental role and duty of MPs,” Sulík said, adding that a judge has sued Alojz Baránik for €200,000, and another judge has identified herself with this.

"Instead of criminal responsibility, there is economic liquidation. Opposition MPs are honest and decent people, they do not earn millions from side jobs," he argued, as cited by the SITA newswire.

Other MPs potentially threatened, too

In the near future, Sme Rodina leader Boris Kollár might pay the same price over a false statement that he has publicly apologised for. According to him, he decided to speak out after hearing about the Baránik case, as he had previously thought that his was an isolated incident.

“With these warning signals, the judiciary has ruled that it will tell MPs what they can and cannot do,” Kollár explained for TASR.

The leader of the extra-parliamentary Spolu (Together) party Miroslav Beblavý supported the opposition, saying that immunity for MPs is only meaningful if it also includes protection from bankruptcy for fines issued in reaction to such statements.

What happened in parliament

Alojz Baránik explained for the SITA newswire what preceded the court’s decision on the fine. He said that when the Deputy Speaker of Parliament, Martin Glváč (coalition Smer party) proposed to appoint Judge Ayša Pružinec Erenová as a member of the Disciplinary Senate, he then expressed his conviction that she was an extremely inappropriate candidate.

"The result of my activity was that the judge was not elected,” Baránik said. “My statements were not self-serving. I fulfilled my mandate as I felt necessary. If the outcome of this process is nothing else, I would be glad if this started a debate as to where the border to what an MP can do lies. If this border is not clear, then judges will always decide what a Member of Parliament can do, and that is unimaginable, it is pure intimidation.”

Baránik said in parliament on February 7 – as quoted by SITA – that Pružinec Erenová is "causing serious delays and decides things in a way we do not want at all; she decides things in the most shocking way. She is a person who is a member of a judicial Mafia and because of this, it is not possible to achieve justice in Slovakia.”.