Petra Vozárová, owner of Coffee Sheep, did not know a word of English when she moved from her native Slovakia to the UK. 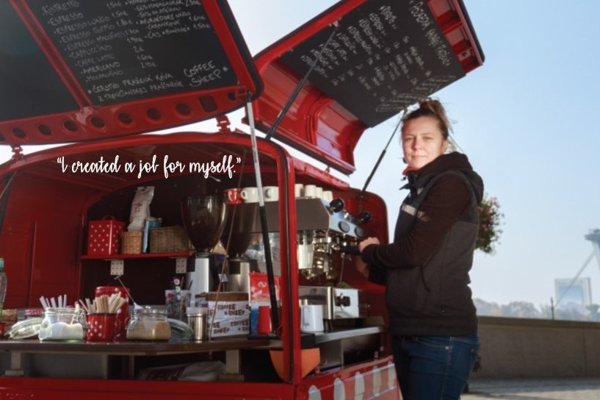 At school, I learned the German language. I felt like I was the only person on the planet who did not speak English.

So I interrupted my studies for a year and went to the UK. When I moved to London, I realized that I was not the only person looking for a job in the city. The whole world seemed to be there with the exact same motive and mission.

I got a job selling sandwiches from a bicycle

I did not speak a word of English, so it was very difficult in the beginning. One shift, a customer told me: “You are so brave!” That’s how I learned what the word ‘brave’ means. It has stuck with me ever since.

Being born in Slovakia, we are taught that we are from central Europe. In England, all Slovaks, Poles, and Czechs were ‘bloody eastern Europeans’. At first I was angry. But then I looked at things from their perspective. You do not know certain things, because you do not need to know them. So, I forgave them.

Soon, I became a manager in the UK

In the beginning, I never wanted to work in hospitality. I only planned on working in the industry for one summer. Then it turned into ten years of my life, on and off.

What do I want to do with my life next?

The UK helped me to find inspiration. Inspiration in how things can work. Many people have come back with similar visions. They saw something out there that did not exist yet in Slovakia. You have to remember, these were educated people that went abroad. Maybe they were working as waiters or barmen, but they also had other skills up their sleeve.

I created a job for myself

I realized it was time to start a new beginning. When I came back to Slovakia, I found myself better able to manage problems. In general, I felt more open and self-confident. Today, I operate my own business. I am comfortable with my life, even if that means standing here all day selling coffee from my truck.

You make a good quality product, you smile and say thank you at the end of it. That’s it! There really is beauty in simplicity. But, I also know, had I stayed in Slovakia, my career path would have been totally different.

Times are changing. Running a business is no longer just about selling some product and making a quick buck. It’s about offering people value. Give them quality and they will gladly pay more.

This testimony was originally published in Zuzana Palovic’s book, The Great Return. For more visit http://thegreatreturn.eu/