V4 countries are not a target for terrorists, nor a significant source of fighters, but they serve for logistic purposes. 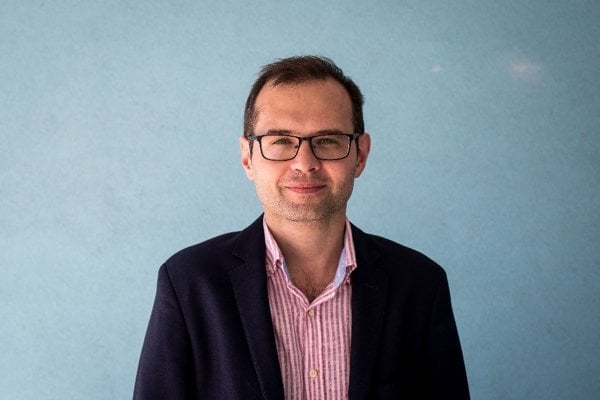 Although Slovakia is not a target country for terrorists, it does not mean that terrorism is not connected to Slovakia as well, says Kacper Rekawek of the Globsec organization, which analyses the lives and actions of people accused of terrorism in their report going by the name Who are the European Jihadis? Even people from the Central European region are fighting abroad and there are groups that send money to extremists and provide logistics support, according to Rekaweek.

The Slovak Spectator (TSS): How did you create a terrorism analysis?

Kacper Rekawek (KR): We wanted to look at terrorism in Europe at the time it reached its peak. It means that we looked at 2015 and it began with an attack on Charlie Hebdo. We observed the terrorists who participated in these attacks, died in them, were expelled and so on. We have focused on whether these terrorists are really former criminals who have been radicalized. After all, we've got a lot of information about what life these people actually lived.

TSS: Does terrorism have anything to do with Slovakia or the V4 (Slovakia, Hungary, Poland and Czech Republic) countries?

KR: In this project, we looked at the eleven countries where the highest number of people were arrested in connection with terrorism in 2015. It had to be more than twenty arrests. Only one of these eleven countries is among the new EU countries and it is Bulgaria. The V4 countries do not have such a high number of arrests, which means there are not so many people involved in terrorist activities.

On the other hand, this does not mean that there is nothing connected to a terrorism threat in these countries. Terrorism is at least an indirect threat to us.

TSS: How is terrorism related to this region?

KR: Our neighbours and allies are directly threatened by terrorism, and the V4 countries can be the transit countries through which this threat comes.

A simple example is Anders Breivik, who committed a terrorist attack in Norway but came to Central Europe to buy weapons.”

KR: We have not noticed other cases of Slovak weapons used in the attacks, but we know that several terrorist groups have tried to buy weapons in this region. Mostly they were not successful because they attracted too much attention.

This is one of the reasons why terrorists no longer use firearms but started using knives and cars.

We will never completely prevent these attacks. But there is a false idea that these people are so-called lone wolves.

In addition, most of the arrested terrorists whose stories we have been analysing have not been arrested for dealing with weapons. These people were responsible for logistics, money, and so on.

TSS: In its last report the Czech secret service mentioned a few people living in the Czech Republic who have been radicalized and joined the terrorists. Is it happening in other countries of the region?

KR: For example, the Poles are conducting 22 prosecutions against the people who helped the terrorists. Some of them are Chechens living in Poland who have sent money to the Islamic state.

TSS: There is little talk about such things in Slovakia. Does that mean that terrorist organizations completely ignore us?

KR: Because there is not a large Muslim community here, and Slovakia did not have colonies in Africa or the Middle East, there is little chance that someone is becoming more radical. This country is not interesting for terrorists, neither as a target nor as a place to recruit fighters.

It is possible that these things are happening in Slovakia, but the local security authorities do not want to talk about it. The situation in Poland is different. It is the only country in the region with anti-terrorist legislation and logically obtains more information.

TSS: How has the situation in Poland changed?

KR: After the 2015 attacks, all countries have begun to adapt their legislation to this increasingly severe threat. We at Globsec appreciate the steps also taken by Slovakia, which, for example, improved legislation related to expansive weapons. They are now no longer so easy to convert to lethal.

In Poland, following the adoption of the anti-terrorist law, investigators began to reveal ties between radicals and Poland.

They found that a few people who lived there moved, for example, to Germany and were radicalized in some local communities. Then some of them returned to Poland because they already had contacts there.

TSS: Is there still a serious loophole in Slovakia’s security situation after the country dealt with the expansion of weapons problem?

KR: We did not notice such a serious problem in our report. But we work with open sources, we do not know everything about terrorists so some problem might occur in the future.

TSS: How did the migration route through Hungary lead to the security situation?

KR: If you wanted to bring a fighter who traveled together with refugees to your country he or she had to have some logistics support.

Someone had to wait for him/her with a car, give him/her documents and money, and investigators in many cases noticed that the movement of these radicals was trouble-free for a long distance.

Today, we know that in Hungary, before this route was closed, that there were such people who helped the terrorists get to western Europe.

TSS: Why would terrorists use refugees’ migration routes on which they could drown at sea or be stopped at the border? Why do their organisations not buy them a normal plane ticket?

KR: It is true that such a decision to send terrorists on migration routes where they were pretending to be refugees was risky and their fighters usually got to Europe in a different way. But it looks like in 2015 terrorist organizations had at their disposal so many fighters that they could afford the risk.

They obviously wanted to use as many ways to get them to Europe as possible. They do not do it today because they are much weaker and need to have their fighters at home. Also, the migration routes are blocked.

TSS: Does Hungary still have a problem with these logistics groups?

KR: Following the closure of this route, terrorists in Hungary have no reason to have such logistics support there. In addition, we now know how they do it and we can prepare for it. But there are other migration routes, and terrorists will look for ways to use them.

TSS: How can we fight terrorism that no longer uses automatic weapons purchased on the black market but an ordinary leased or stolen car?

KR: We will never completely prevent these attacks. But there is a false idea that these people are so-called lone wolves.

Mostly they are not and they have some contacts with other people and radicalised in some places. We can track these things. It is possible to fight such terrorism with improved cooperation between security forces. Countries should also exchange more information and have to develop better cooperation with social network providers.

Moreover, it is no longer just a matter of power. Radicalization can be observed by prison staff, teachers at schools, and so on. Everyone who sees something suspicious should report it.

TSS: How many people in the European Union are willing to join terrorists today?

KR: We can only calculate based on estimates. More recently, Gilles de Kerchove, EU Counter-Terrorism Coordinator, said that between five and six thousand people of the EU went to Syria and Iraq.

Furthermore, security forces in western countries are monitoring people who can be radicalized. There are several tens of thousands of them. For example, in France alone they are twenty thousand and another twenty thousand in the UK.

Of course, that does not mean that these tens of thousands of people are willing to sit in a car tomorrow and run people over. They are just suspects. From these figures, it can be concluded that the actual terrorist threat today is represented by dozens, perhaps hundreds of people in Europe.

In addition, there was a group of people arrested in connection with terrorism in 2015. They start leaving prisons in around 2023 and can then spread influence among other people with a tendency towards radicalisation.

All this information suggests that terrorist attacks will occur in Europe for many years to come.

TSS: What can be done to ensure that these people will not get radicalised?

KR: It's a complex question and no one knows the full answer. It is societal issue but at the same time it is a very individual question. Modern jihadism arose about forty years ago when the revolution in Iran and the war in Afghanistan began.

We will have to find a way to convince people that this ideology is harmful and that terrorists are not martyrs.

TSS: The Slovak Intelligence Service evaluates the Slovak Muslim community as moderate. Can hate speech against Muslims radicalize this community?

KR: In general, we cannot say that. However, we know of some case when refugees who were not radical became extremists after they arrived to Europe. They did not feel welcomed here, they imagined Europe to be different and so on. They subsequently helped organize terrorist attacks.

Even examples in the past show that hatred only generates further hatred. For example, when extreme left-wing groups fought extreme right groups. When one group attacked the other, the other carried out revenge and so on. This is also happening in the present when extremists attack Muslims.

For jihadists, this would be an ideal situation. They want Europeans to attack Muslims so they can then recruit more radicalized fighters.