Foreigners in Slovakia: We did not feel welcomed at first

In the eyes of foreigners Slovaks are friendly when they overcome their first fears. 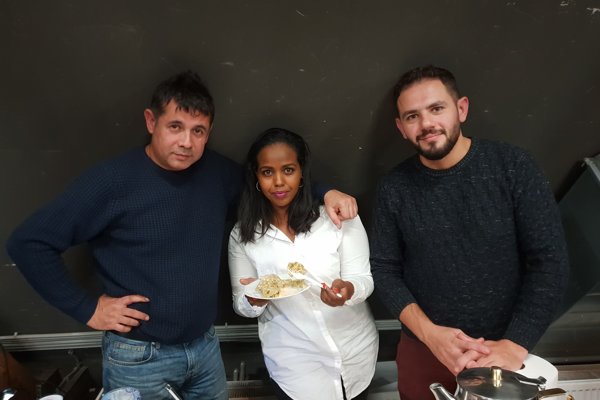 “We are Trnavans, all three of us,” said Naima Abdi in Slovak and her other two co-debaters smile and nod. Naima from Somalia has lived in Slovakia since 2009 and she speaks fluent Slovak, only making a few mistakes from time to time.

She and her colleague spoke at an event organised by the IOM Migration Information Centre Slovakia, which is supposed to connect foreigners with Slovaks.

“The first contact with Slovakia was not pleasant,” admits Naima, who moved to Slovakia when she was 16-years-old.

Her father was the first to come to Slovakia, found a job and then arranged a visa for his family. Slovakia is not a well-known country among migrants and Naima was shocked when she found out where she was supposed to live.

“Everyone was staring at us. Literally everyone,” she said, explaining that she has six brothers and when they decided to go somewhere as a family, it was even worse. Despite this, she has no negative experience towards her as a foreigner in Slovakia.

Ameer Mayyahi ended up in Slovakia when he and his father escaped from Iraq. His parents are artists and they were persecuted because of their opinions. Even though the majority of Ameer’s family lives in the US, he decided to stay in Slovakia.

“I feel like at home in Slovakia, now,” he opined.