Moving the Foreigners' Police to Vajnory is an improvement

But more can be done for foreigners, says Vajnory Mayor and candidate for the mayor of the capital, Jan Mrva. 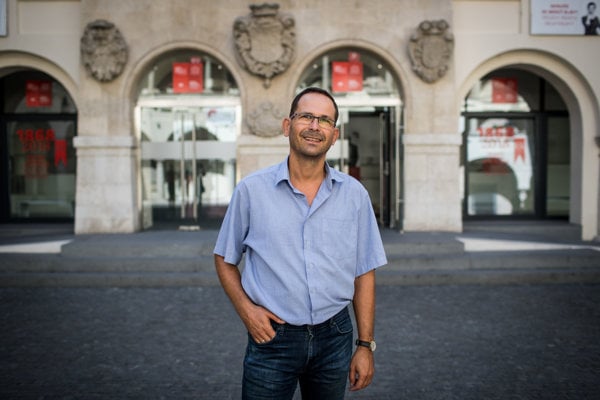 In this interview, candidate forBratislava mayor Ján Mrva talks about:

- how to improve transport in the capital

- how to get more money intoBratislava’s coffers

Geodesist by profession, the cycling-positive Ján Mrva has been serving his 12th year as the mayor of the former village of Vajnory, now part of Bratislava. Now he would like to move on and make use of his knowledge as the next mayor of Bratislava.

Ján Mrva (JM): Now, during the election campaign, I often use a car as I need to

take with me election leaflets and materials to my meetings with Bratislavans. So I cannot use a bike as I usually do in Vajnory. I also travel by public transport, especially during weekends when I want to have a beer with my wife and friends in other parts of Bratislava.

JM: Based on surveys I did among Bratislavans, they are aggrieved by transport

not working properly, while this includes not only traffic jams but problems with parking and insufficient public transport, unregulated construction with developers filling in each green area with new construction and cleanliness, while this does not include only cigarette stubs on the ground, the city is not tidied up in general.

TSS: What solutions to these problems do you propose in your election programme?

JM: My election programme has five pillars. The first one is functioning transport enabling people to get anywhere in Bratislava within 30 minutes. The second one is cycling transport. I promise, if elected, to build 30 km of cycling paths during the four-year term. The third one is less bureaucracy so that when a citizen comes to the city council to arrange something, they will give their personal and other data only once and the rest of the communication is online. The fourth pillar is security and the environment. I want to have three times more the amount of street cameras and plant 1,500 trees in Bratislava. The fifth pillar is community, while I want to double funds for communities, social affairs and sport.

TSS: Could you be more specific in your proposed transport solutions?

JM: I want to interconnect trains, trams and passenger transport. These include prolonging the existing tram lines to the very ends of the city, i.e. in Dúbravka where the tram line might be extended even to carmaker Volkswagen in Devínska Nová Ves, then in Vajnory and Petržalka. A new tram line would be built to Vrakuňa. Filiálka, a no longer used rail station in the very centre of Bratislava close to Trnavské Mýto, will be put into operation again. It will be used as the end station for commuters travelling to Bratislava while from here a large-capacity underground, I call it the train-tram, would go to the area around Mlynské Nivy. Since here a new district of high-rises with a lot of offices is just being built, there will be a need to transport thousands of people each morning and take them home in the afternoon. But the trams are too small for this. To make the transport system work, it is also necessary to implement a proper parking policy and offer people clean, fast and preferred public transport.

TSS: What about the other problems that Bratislavans highlighted?

JM: For the unregulated construction my solution is that not investors, but the city and boroughs would set what should be built and where and not vice versa as it is now. Also, I want to introduce regulation on the height of new buildings.

In terms of cleanliness, I want to return to what used to work well in Bratislava. It was the city’s company of technical services, which was responsible for the maintenance of roads and greenery in the city. Now these services are outsourced.