The daily analysed the thesis identical to that of Parliament's Speaker Andrej Danko to find it was copied from textbooks. Danko does not plan to resign, he wants to wait for the stance of a special commission. 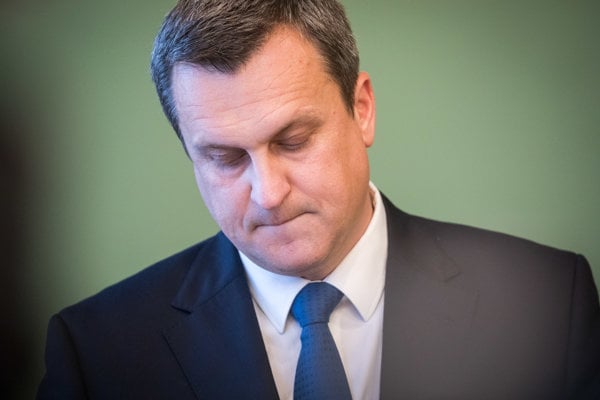 The thesis that Parliament Speaker Andrej Danko wrote for JUDr. title is a mere compilation of texts from five textbooks.

Danko submitted the thesis in 2000 and subsequently received the JUDr. title from Matej Bel University in Banská Bystrica. When media showed interest in his thesis, he ask the university to bar public access to his thesis. Following public pressure, Danko removed the ban and the university library allowed the public to see the thesis, but not take pictures of it.

Denník N reporters analysed the text of another thesis that they found to be identical to that of Danko, including misspellings. This thesis was written by Daniel Pisák, a Bratislava-based attorney, and submitted one year after Danko's.

The thesis of Pisák, much like that of Danko, contains little more than a one-page introduction, after which follow 25 pages with text from a textbook by Dušan Hendrych. Denník N analysed the thesis page by page and found it was compiled from copied texts from five textbooks. The copied pieces are up to 25 pages each.

The texts in the thesis are not cited in line with the then-rules of Matej Bel University and most pages give the impression that they are the author's own work, Denník N wrote.

The names of the supervisor and the opponent of the thesis are not publicly known either.

Moreover, the thesis does not contain basic sections like the conclusion and the bibliography.

"If the author does not clearly and unambiguously separate their own text from citations, it is presumed to be the original text of the author, even though the author is using others' thoughts, pretending that belong to him or her," expert on academic texts, Dušan Katuščák, told Denník N. "This is considered plagiarism and the author is a plagiarist."

Denník N wrote that even in 2000 the violation of copyright classified as a crime punishable with a prison sentence. If investigation confirms that Danko violated the law, the statute of limitations has already expired and the perpetrator can no longer be prosecuted for the crime.

Matej Bel University announced on November 14 that they have put together a special commission to evaluate the theses of Danko and Pisák over plagiarism concerns. The results of their investigation should be available at some point in January 2019.

Danko does not admit to plagiarism

Even though at first, Danko did not want to respond to questions and his spokesperson, Tomáš Kostelník, told the media he would comment only after the commission had checked his doctoral dissertation, he later held a press conference on November 15, and is refusing to step down from his post.

“I want to reiterate that I wrote my doctoral dissertation, to the best of my knowledge and conscience, in accordance with the regulations and technical possibilities of that time,” Danko said.

He also admitted that there are problems within the coalition. At the same time, he stated that the SNS will support the summons for a non-scheduled parliamentary session to discuss his resignation.

“I have no other choice than to try to win coalition trust again,” he added.

While his coalition partner Smer supports Danko, claiming that he “is the legitimate Speaker of Parliament as has emerged from free democratic elections”, as reported by the TASR newswire, Most-Híd is more critical. It called on him to make “a personal decision”, TASR wrote.

Opposition calls for resignation too

Meanwhile, several opposition parties have called for Danko’s resignation from his post as Speaker. If he does not step down voluntarily, they will collect signatures to summon a special parliamentary session where they will attempt to remove him from his post.

Freedom and Solidarity (SaS) called on Danko to pull out of public life and remove any mention of his law degree from all public parts of parliament where it has been published. The Ordinary People and Independent Personalities (OĽaNO) asked Danko to disprove the suspicions or return his degree and resign from his position as Speaker of Parliament.

“Politicians step down because of plagiarism in normal countries,” OĽaNO wrote in a statement, as quoted by TASR. “We have seen several cases in the Czech Republic.”

Boris Kollár of Sme Rodina (We Are Family) said that a person like him (Danko) should not even be in parliament, while non-parliamentary political parties the Christian Democratic Movement (KDH), Spolu – Občianska Demokracia (Spolu – Civic Democracy) and Progresívne Slovensko (Progressive Slovakia) have supported the call for Danko’s resignation.