Message to Angela Merkel: Europe can save the world

But Germany and France must take the lead. 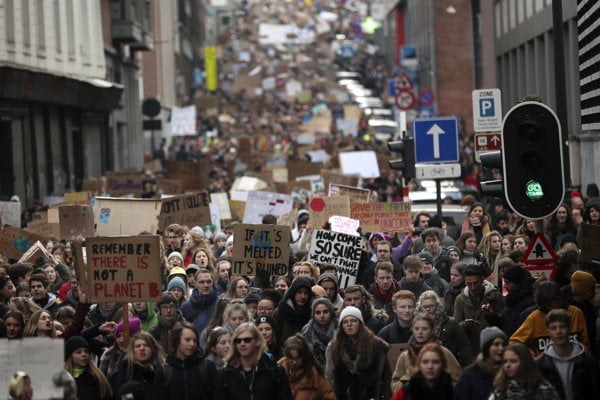 Thousands of youngsters crowd the streets as they march during a climate change protest in Brussels, Jan 31, 2019. (Source: TASR/AP)
Font size:A-|A+231

It is extremely difficult for the common people of Europe to be heard by a top European leader. Even more so for those who, like half of all Europeans, come from the smaller EU member states. Occasional visits by major leaders to their countries provide at least a glimmer of an opportunity to be heard.

German Chancellor Angela Merkel will visit Slovakia on February 7. The issues the Slovak, Czech, Hungarian and Polish politicians will bring to the table will focus on local agendas and desires. Such is the nature of provincial politics and the short-term perspectives of our current democracies.

If things were different, the Visegrad leaders would instead ask Angela Merkel to push for and head the slow European Union towards a leadership role in what is probably the most important task of this generation. To save the world’s climate and with it our civilisation. No one else in the world can do it, only Europe. But Europe can only do so with determined German and French leadership.

The world needs your leadership

These two countries once gave us Robert Koch and Louis Pasteur, the men who saved the world from the plague of infectious diseases. Today, the world needs Germany and France to provide leadership in averting our path towards self-destruction.

Back in 1995, when Berlin hosted the first of the 24 annual global conferences on climate change that have taken place to date, atmospheric CO2 concentration was 360 ppm. Today, it is 410 ppm and rising.

These numbers clearly do not ring a warning bell in Brussels, Berlin, Paris, Warsaw, or in Bratislava, but they are unprecedented in the geological history of the Earth. Masses of students and children on the streets of German, French, Dutch and Belgian towns demanding action on climate change seem to understand the danger. Does Angela Merkel?

As a trained physicist you certainly could.

The Global Warming 1.5 °C report published by the Intergovernmental Panel on Climate Change (IPCC) in October 2018 concluded that to keep temperature rises below 2°C, humankind must reduce greenhouse gas emissions by at least 45 percent by 2030, compared to 2010. This is totally unrealistic without a massive and urgent effort that exceeds by orders of magnitude such projects as Manhattan, Apollo and the Marshall Plan, projects which saved democracy for the world, put the first people on the moon and saved most of Europe from post-war misery.

Only the EU can do it

The time for business as usual is over, Ms. Merkel! With the United States paralysed by Republicans entrenched in climate science denial, and with China unable to lead the world, the European Union is the only political player capable of leading the global effort to save our planet’s climate.

We, the Europeans, alongside the Americans, bear by far the largest historical responsibility for climate change – twice as much as the Chinese and many times more than the people of other countries. Responsible for almost 10 percent of the current global greenhouse gas (GHG) emissions today, the EU is still the third largest climate killer.

No one else has such historical responsibility, economic weight, and the political clout capable of steering a U-turn from our path to self-destruction. But European leaders must not be paralysed by apathy, ignorance or the feeling of being too small and unable to save the world’s climate. Europe, with its economic and technological resources, is the only global player that stands a chance of reverting the trend towards global self-destruction by climate. And if you are the only one who can do it, you must try.

Let’s not be mistaken: Europe’s climate healing potential is not limited to 10 percent of our current GHG emissions. The technologies, strategies and resources mobilised by Europe can create and scale up global markets that will make clean technologies affordable for India, Indonesia, Brazil and other major but poor polluters. For China and the US too.

Europe needs to reduce the burning of coal, oil and natural gas with extreme speed. For this, no miracles are necessary: there are numerous proven and accessible ways that this can be done.

What is missing is committed leadership with a sense of urgency. Only Germany and France, Ms. Merkel, have the authority to provide such leadership in Europe.

Examples of what can be done within just a few years of determined action are plentiful.

The Chinese city of Shenzhen was able to fully electrify its fleet of 16,000 buses in six years. In total, about 99 percent of the 385,000 electric buses in the world were in operation in China in 2017, accounting for 17 percent of China’s bus fleet. Europe, where half a million people die annually due to the air pollution partly caused by exhaust fumes from motor vehicles, is shamefully behind. But the EU has all that is needed to do on a continental scale today what China has already done on a mega-city scale.

Electric buses and trucks rather than cars

Europe’s push towards electrification of its bus fleets would force the prices of electric buses below their diesel competitors. Europe can also fully electrify the fleet of European trucks within less than a decade, thus pushing their prices below their diesel competitors. Constantly moving buses and trucks should be prioritised over personal cars that spend more of their lives in garages and on parking lots.

Getting rid of oil in transport would indeed be useless, if electricity was still produced by burning coal but not if electricity came from renewable sources. This too is doable – and doable quickly, because time is of the utmost essence. Professor Damien Ernst recently proposed a bold idea of how Europe can dramatically increase her use of wind and solar energy by building submarine power cables connecting Europe with Greenland and North America. The distance between Greenland and Europe is shorter than from Denmark to Sicily.

Extended to eastern Ukraine and Turkey, European mornings could be powered by solar electricity from these countries, while the huge wind energy resources of eastern Greenland could power Europe on cloudy days and in winter. No technological breakthroughs are needed: there are already wind farms operating further north than half of Greenland is. Further afield using the same approach, the sunny deserts of Australia could rather quickly power the most populous countries in the world, replacing coal burning in India and Indonesia.

Nobody is saying it will be easy. But it is doable and could be done within a few years. But only with German and French leadership.

There is no one else who can save the world, Ms. Merkel!

Thank you for singing up. Shortly an email will be sent to the address you provided to verify your e-mail.
Error! Please try to register again later, your e-mail was not registered.
Your email is not in a correct format.
Please confirm you are not a robot.
Share on Facebook (231)Comments disabled