Media zombies are soft on the powerful 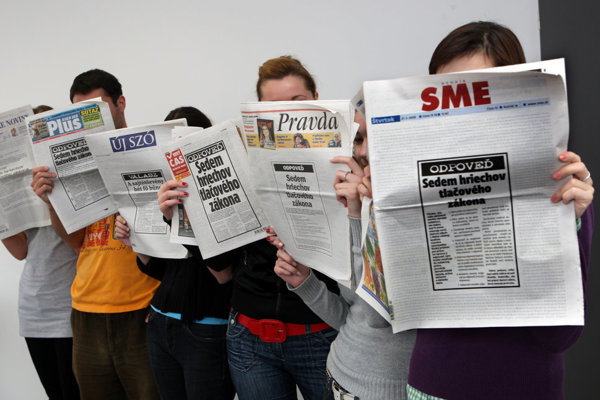 In November 2016, Robert Fico still bragged that he did not limit press freedom even with his single-party government, despite the fact that according to him, the media “abused” their “immense freedom”. He did have an obedient army of MPs to reinstall the restrictive right of reply for politicians in the Press Code, but he never pulled that trigger.

Back then, Fico still tried to squeeze himself into the costume of the most democratic politician in the Visegrad Region. His neighbours posed poor competition while Fico's statements about the media had already suggested autocratic tendencies. The public had not yet been aware of the scope of moral decay he covered up with his prime-ministerial body.

A few weeks after the murder of Ján Kuciak and Martina Kušnírová he repeated once again that “Smer, under its one-party government, despite the objective reservations towards the quality of journalistic work, took no measures that would limit media freedom in Slovakia”. But his free press friend makeup could not hold under the words he used: slimy snakes, prostitutes, hyenas, and idiots.

The year of the murder gradually stripped the last remaining disguise from Fico and a large part of the political representation. They talk to disseminators of conspiracies, they make statements for websites that spread chaos, hate and hoaxes among the disoriented part of society. They refer to critical journalists as the opposition or a disruptive power and enemies of the state. They spin conspiracy theories, attack, and pump verbal aggression into the public discourse.

Media zombies are soft on the powerful

Part of the ruling coalition seeks inspiration in the political repertoire of Donald Trump and Viktor Orbán. Of course, when it comes to suffocating the media, they too nurture their own creativity.

Orbán has created an army of media zombies trumpeting that they are the journalists his country needs. In reality, though, they only disseminate moral disintegration and fear. The media zombies never criticize the powerful, do not reveal government corruption and avoid discussion. They only disseminate governmental messages in different variations.

George Soros is the source of all the nation’s misery. Those who declare that this is a lie and propaganda are promptly labelled as Soros's mercenaries. The phrase “because of Soros” ends all public discussion in Hungary, just as in the thirties, when blaming the Jew for all misfortune ended any discourse.

Thus the Orbán-friendly media eliminated any critical discourse and the media zombies lash out at anyone who criticises the government, marking them with the Soros “star”.

In Slovakia, we still have critical media that not only strive to survive but also have the ambition of keeping those in power in check. And so, some politicians and their in-house analysts talk about media tyranny. They seek ways of pacifying journalists, showing them “their place”: so that they do not interrupt when a politician speaks and does not repeat unanswered questions; so that they cooperate, report on the government’s success, polish the image of the country, and make people believe that everything is going the way it should.

The kickbacks, the Bonaparte apartments, the buddies who do not pay taxes, the EU funds portioned along the lines of power, the high posts as a retirement bonus, all of that is the price we have to pay for economic growth, stability, and streets safe from swarms of refugees. The ones that never really wanted to come to Slovakia.

This is a fight for the re-defining of journalism. Two of Fico’s footmen, Dušan Jarjabek and Miroslav Číž, have joined the battle. Applauded by a big part of the parliament, they want to return the right of reply for politicians into the Press Code.

Politicians do have the right to demand correction for untrue statements, which many countries consider sufficient.

This change is not happening in the public interest. Politicians do not even pretend that this is about the voter. The attempts to resuscitate the replies for public officials mainly serve politicians unhappy with media criticism and fail to understand that being subject to public scrutiny is part of being a politician.

Politicians really are no endangered species. They are not a minority without any power to influence the conditions of their lives. They are not deprived of a voice. Press conferences take place, press statements are sent around. They communicate in the parliament and they even have the luxury of picking the media they speak to and the ones they ignore. This is regardless of being paid from the voters’ money. At a time when social media is thriving, the argument that their “defence” will not reach their voters,comes across as absurd. Moreover, they do have the right to demand correction if the media publish something that is not true, or if they print a deceitful interpretation of facts.

Politicians want more. They want to have the possibility to interfere with the work of editors and force them to publish their reply even in cases when politicians lie or mislead. Meaning the media would have to publish unsolicited content for which they cannot bear moral responsibility.

With the amendment, politicians want to tell journalists that they still have some weapons to use against the journalists. Spreading hate against journalists or treating fake news media like real journalism are some of the weapons they have used. Interfering with the Press Code is the weapon they are using now.

Last year the Culture Ministry created a working group to discuss a new press law. This change comes without any discussion with professionals or media publishers, who joined the working group to discuss digital challenges and better protection for journalists. The Smer-nurtured proposal turns the previous debate on the revision of the code into a pathetic show.

The proposed changes take place in an atmosphere when politicians picture journalists as an organized force working against the state interest through criticism. And of course, the politicians and their nominees at all levels are the state.

The state is Andrej Danko, who burned his moral credit like a Christmas sparkler and is now fantasising that politicians should be able to react not just to factual claims but also opinions. Perhaps they could also add cartoons. His coalition partner Fico does have experience with that as he in the past he sued a cartoonist.

The parliament passed the right of reply for public officials as part of thePress Code, drafted by the ruling Smer, in 2008. The then OSCE media freedom representative, Miklós Haraszti, said that “the mere fact that such a law exists undermines editorial freedom because the media will be obliged to published unsolicited material”. It was not hard for Haraszti to imagine where such measures may lead in the hands of politicians with no inhibitions: “newspapers getting flooded with replies from political forces unable to accept criticism, even when the criticism is well founded”.

They are not in danger

Under the Iveta Radičová government in 2011, the parliament left this right to natural persons only. Most politicians are not more endangered than they were ten years ago. If they are, the danger is posed by their own corruption and moral decay, their ties to mobsters and their hardworking assistants.

The current OSCE media representative,Harlem Désir, has repeated what was said in 2008. The return of the right of reply for politicians “represents a high risk of undue and disproportionate interference in the editorial independence of the media, and must not lead to permanent pressure or self-censorship of the media.”

Politicians must, according to Désir, accept a high level of scrutiny and criticism, and the media must be able to do their job without facing financial threats; which, obviously, will not be possible given the fines the Smer MPs proposed.

The Slovak political representation will undoubtedly pull examples of existing restrictive paragraphs in press laws in some advanced democracies. The difference is that the vast majority of those laws are obsolete and almost never applied. Hence the media do not object to them.

Having said that, every independent publication should have an interest in correcting its mistakes, untrue claims, or misleading interpretations of facts. That is the way to protect their reputation, which also decides why critical media will survive. The reader decides that, not the politician.

The Eeents of the last year have shown that the parliament needs to consider a completely different set of measures. Society should think about how to make sure critical and independent media will be preserved and the political impact on them will be limited. Because the media are one of the guarantors of democracy.

Obviously, the content of critical media is far from what your ordinary politician, in Slovakia mainly those in the government, considers acceptable. But democracy has that in its DNA, it provides more protection for a citizen from unfounded criticism from the media than to a politician. Dictatorships have the very opposite understanding of whom the state should protect from media criticism.

This time around, Slovakia’s now-proverbial dam against extremism does not mind voting together with the fascist party about a change that international experts, including the OSCE media freedom representative, brand as not press-freedom-friendly. When these politicians look at society, what they see is that they need more possibilities of opposing the media and more control over their content.