Fifty soon for death, wrote Kočner shortly before the murder

Some Threema messages between Kočner and Zsuzsová proven by other evidence. 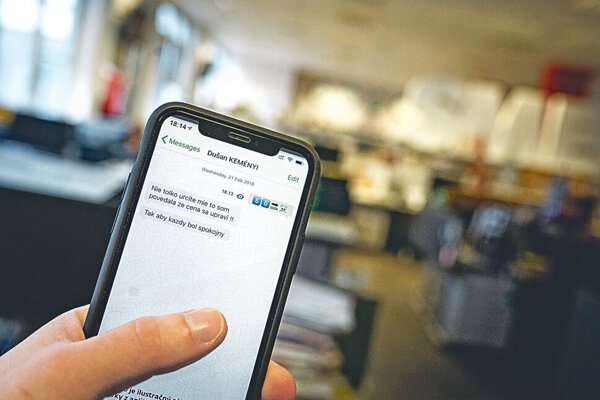 Some of Marian Kočner’s messages in the Threema application confirm, according to the defence, that he ordered the murder of journalist Ján Kuciak, which also resulted in the killing of his fiancée Martina Kušnírová.

On the evening of February 21, 2018 Kočner sent a message to Alena Zsuzsová with only four emoticons and no text. They were symbols for the number 50, an arrow pointing to the right with the word “soon” underneath, pointing to the skull and crossbones symbol. The last one, according to Emojipedia, stands for danger or death.

The investigators believe Kočner ordered the murder for €50,000, and paid an unknown sum later, when the killers found out that they had killed the journalist and his fiancée.

Zsuzsová’s reaction on Threema confirms that the number 50 in Kočner’s message expresses the value of the contract: “No, definitely not that much, I said the price would be adjusted! So that everyone is satisfied,” she replied to the emoticons.

Kuciak and Kušnírová were murdered 129 minutes later in their house in Veľká Mača.

Although the Threema transcripts are part of the investigation file, the prosecutor is working with more direct evidence in the case against Kočner, Zsuzsová and co. The transcripts are meant to give a wider context.

Based on the messages, Kočner did not know when and where the journalist would be killed. The police believe that they first wanted to kidnap Kuciak and murder him in such a way that his body would never be found. They later changed their plan.

Kočner’s Threema also contains several messages whose content cannot be unambiguously linked with the murder without further evidence, because they communicated in hints and code.

Kočner claims that he did not order the murder of Kuciak.

Zsuzsová in her testimony denied mediating the communication about the murder and claims the messages from Threema did not come from her. Many of them correspond with further evidence that the police have found, though. For instance, their meetings with Kočner, which they organised through Threema, can be proven by data from telecom operators or by picture.

Media that had the transcripts have not wanted to publish the messages on the murder so far, not to complicate the investigation before formal charges are pressed. The indictment was submitted on October 21, 2019, and the prosecutor requests that the messages to be taken into consideration as evidence and publicly read during the trial.

At this point, both the defendants and their attorneys have had the chance to study the case file and are familiar with the transcripts the prosecutor wants to read during the trial.

The Specialised Criminal Court in Pezinok is now studying the indictment and will decide on the future proceeding. It will either return it to the prosecutor to add details, or set a trial date.

Each of the four persons who will go to trial to face life sentences if proven guilty. The defendants are Kočner and Zsuzsová, Tomáš Szabó and Miroslav Marček. The police believe the latter two to have executed the murder, and the evidence against them is the strongest.

Kočner asks: they managed nothing?

“Are you also handling the interiors on the USB?” Kočner asked Zsuzsová on February 12, nine days before the murder.

They never communicated about any interiors in Threema before or after, and the messages that follow suggest it is a code word for pictures from the surveillance of Kuciak that Kočner had ordered from former journalist-turned-spy Peter Tóth.

The prosecution believes Kočner gave them to Zsuzsová as materials for the preparation of the kidnapping and murder. “Sure, a long time ago! I will return it to you too, and that project should allegedly be carried out this week,” she wrote him.

The week was coming to the end and on Sunday, February 18, Kočner again inquired what was going on. “They managed nothing with the USB?” he asked. Her answer makes it clear that they weren’t really talking about any interiors. “They did, but it was Valentine’s Day and then immediately f**king snow. But it will lift. Everything is loading 90%. You think I’m joking when I complain about that f**king snow?” Zsuzsová wrote.

That week, Szabó and Marček repeatedly moved around Veľká Mača, staking out the surroundings of Kuciak’s house, planning their attack. Data from the mobile phone operators and camera recordings that the police have gathered prove this.