Kočner in trial: Rusko in hospital postponed the hearing of experts on signatures

Court also heard the ex-wife of a murdered attorney as witness. 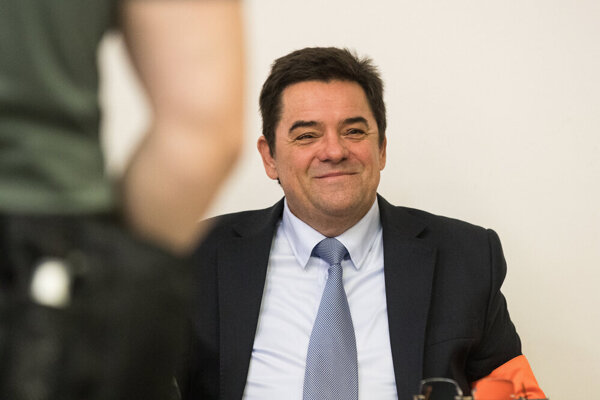 The Specialised Criminal Court continued hearings in the process of the forged promissory notes case, in which Marian Kočner and Pavol Rusko stand as defendants. Despite complications linked to Rusko’s absence, the court for the first time heard forensic experts on the authenticity of his signatures and the age of the ink used for them.

The trial has been going on since July 22. Kočner and Rusko stand accused of forging four promissory notes of the private television broadcaster Markíza and using the fakes in 2016 to demand €69 million from the network. Rusko has testified that he issued the promissory notes as a private person and signed them as the statutory representative of Markíza, thus binding the network to pay the debt if he did not have the money. Nobody had any idea about the promissory notes until 2016, when Kočner started demanding the money.

Rusko did not attend the hearing as in late November. He has been on sick leave. On December 2 he also informed that he was going to hospital. Rusko did not give his approval for the court to develop the evidence provided by forensic experts in signature recognition.

That was the reason why expert Erika Straková wasn’t heard as planned on Monday. The court proceeded to read the documents regarding the Gamatex case that have been submitted as evidence. The court also read the statement of former vicepresident of the CME company Frederic T. Klinkhammer, who denied the existence of the promissory notes, the Sme daily reported.

On December 3, the court heard witnesses Pavol Varga, former Gamatext representative, and Ivan Beňačka, former official of the now non-existent privatisation ministry. While Beňačka only answered the questions as saying that he does not remember anything, Varga confirmed that there was an interest in Markíza among a group of businessmen offering 350 million Slovak crowns.

With the Varga testimony, the defence is attempting to prove that the 80 million crowns that CME paid for Gamatex was too little and the promissory notes were issued to complement the sum, Sme wrote.

On December 4, the court heard the graphognostics’ report, as well as that of experts on determining the age of the ink on the documents. Prosecutor Ján Šanta believes they prove the notes had been forged.

Šanta read six documents from Slovak and foreign forensic experts. The atmosphere was tense, Kocner was reserved and the prosecutor had several disputes with the defence lawyers about the documents that were read in court, Sme wrote.

Kočner and his lawyers question the reports, and complained that some of them were read as documentary evidence. This means that the experts who wrote them do not need to be called in to testify.

“Why am I not able to ask these experts questions?” Kocner said as quoted by Sme.

None of the reports, including one from a British expert on determining the age of ink, Valery N. Aginsky, speak to his favour. His complaint pertains to a report that was Criminalist and Expertise Institute running under the Police Corps prepared for the purposes of another process, but Prosecutor Šanta had it read as documentary evidence in the trial with Kočner and Rusko. This report examined the signatures of Kočner’s collaborator Štefan Agh, who stands accused of forging the notes in a separate case. The report stated he did not sign the notes in 2000 as he claims, but only 15 years later.

Kočner is complaining that the report was written by an expert who does not have schooling in this field.

Oľga Valková, ex-wife of the murdered attorney Ernest Valko, testified in court on December 4. Rusko and Kočner claim that Valko advised them in 2000 on how to proceed with the promissory notes.

“I was disturbed to hear Mr Kočner call my former husband as someone who would advise them and prepare this,” Valková told the court as quoted by Sme. “I was disturbed because Ernest would not have broken the law.”

Kočner insists on his version of events. He said that after Valková’s testimony that he saw no reason for Valko to discuss this with his wife. But, as Sme pointed out, Kočner had claimed in the past, when Valko’s murder was being investigated, that Valko never represented him.

The trial, which has lasted 17 days so far, is scheduled to continue on December 16 and 17 and then five more days. The graphognostics who wrote some of the reports will be called in personally only in early 2020. Pavol Rusko, currently hospitalised, insists that he wants to be in court when the graphologists come to testify.