The designated prime minister will first present the names of the proposed ministers to President Čaputová, then officially reveal them to the public. 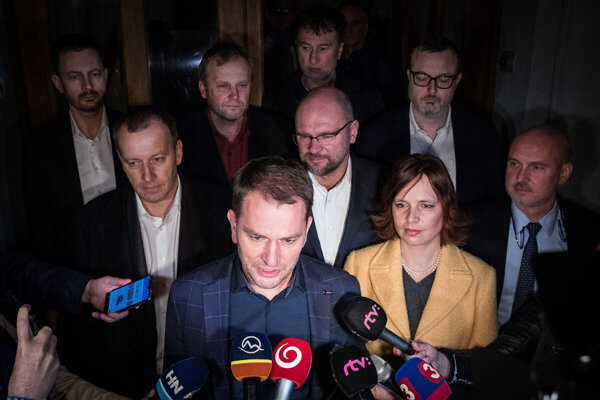 The future ruling coalition leaders after they have reached a deal on the distribution of ministerial posts. (Source: Sme - Jozef Jakubčo)
Font size:A-|A+  Comments disabled

Igor Matovič has a list of names for his cabinet ready to be presented to President Zuzana Čaputová.

Four parties of the future ruling coalition, OĽaNO, Sme Rodina, Freedom and Solidarity (SaS), and Za Ľudí, concluded their talks about the distribution of the governmental posts on Friday night.

The final agreement came after a crisis in communication betwen Matovič and SaS leader Richard Sulík who clashed over the top Finance Ministry post.

In the end, the prime-ministerial party, OĽaNO, will get the post of the finance minister.

Sulík of SaS will be the first deputy prime minister for economy as well as the economy minister.