Banská Bystrica: Capital in spirit (from our archive)

A beautiful old town, majestic mountains and a war museum. 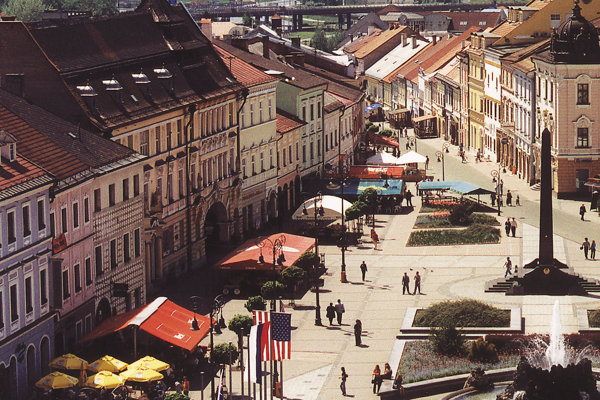 This is an article from our archive of travel guides, Spectacular Slovakia. We decided to publish it for our readers, making only necessary adjustments. For up-to-date information and feature stories, take a look at the latest edition of our Slovakia Guide.

The first Slovak prime minister, Vladimír Mečiar, suggested shortly after the establishment of Slovakia that its capital should be moved from Bratislava to Banská Bystrica. I cannot believe I am about to write this, but I agree with Mečiar.

Banská Bystrica is everything a Slovak city should be. It has the country’s grandest SNP square and a beautiful Old Town, it is surrounded by the majestic mountains so typical of Slovakia, and it has a long, proud history.

Unfortunately, Mečiar’s idea could not work, which is probably why he never seriously pursued it. The city of 84,000 lacks the necessary infrastructure to make such a switch feasible. Plus, with few direct train lines from Bratislava or Košice, it would be a remote capital. But the sentiment is well-understood: Banská Bystrica is a city all Slovaks can be proud of.

Consider its Slovak National Uprising (SNP) Square. While cities around the country have renamed their main squares SNP, in honour of the Slovak partisans who fought the Nazis in World War II, Banská Bystrica’s is the biggest and brightest. This is appropriate, for it was in the nearby mountains where much of the fighting took place, and it was in Bystrica itself where the movement was originally concentrated.

The SNP Museum, two blocks from the square, examines Slovakia’s controversial role in World War II. At first a Nazi puppet state, Slovakia ultimately aided the Allies thanks to the partisans who tied up thousands of German troops in the mountains.

A large white oval split down the middle, the museum is designed like a klobúk, the traditional Slovak hat worn by folk characters like Jánošík. English-speaking visitors are guided through the tour with a portable cassette player and a tape explaining the exhibits in English. The voice belongs to American Mimi Gosney, whose father is featured in an exhibit on US involvement in the SNP.

Moving back to the square, visitors find a glorious pedestrian zone in the middle of dozens of stunning historical buildings. For an overview, climb the Town Clock Tower at the summit of the square. From the observation deck, the entire city and region sprawl out before sightseers.

The adjoining Štefan Moyzes Square is home to several historical sites, like the Church of the Virgin Mary (or ‘German Church’), the oldest building in town, capped by a red and beige spire. The church was originally constructed in 1255 and until 1948 was surrounded by 15th century castle walls. The crumbling fortification system was torn down, however, to make room for a new post office.

Nearby is the Church of the Holy Cross (or ‘Slovak Church’), which although crumbling is still a site. Across the street is the Matthias House, built into what remains of the castle wall. A gateway through the rampart leads to a small cemetery, an island of serenity in the bustling city centre. From here visitors can view the only remaining fortress bastion of the castle complex.

An important building on SNP is the Thurzo House (SNP Námestie 4), where the Central Slovak Museum is located. In the 15th century, it was the administrative office of the Thurzo-Fugger Company, an enormously successful copper-mining and smelting operation.

Finally, in the middle of SNP Square is a large black rock covered in moss that serves as an odd but pleasing fountain. About 50 metres away is a black obelisk commemorating the Red Army and Rumanian Army, which liberated the city in 1945 after fighting their way up from Hungary. In the summer the whole square becomes one big outdoor cafe with free chairs often in short supply. 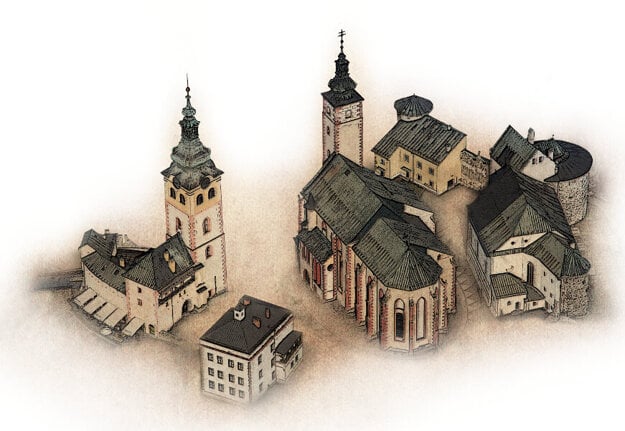