Situation remains serious in the districts of Púchov and Stará Ľubovňa, tests showed. 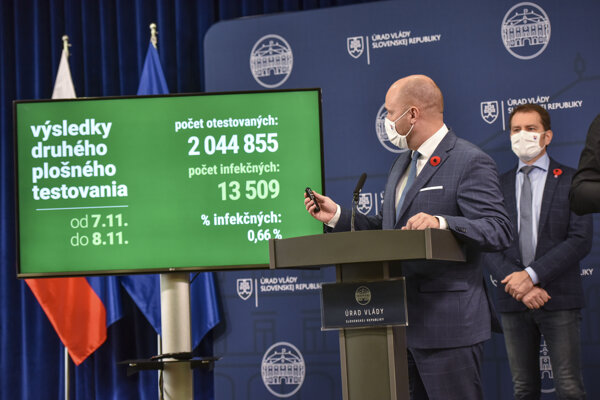 Nearly 21,000 soldiers, police officers, firefighters, rescuers, health-care workers and administrative workers were involved in the testing that, together with the pilot, took place over the past three weekends, Defence Minister Jaroslav Naď (OĽaNO) added.

The most in Púchov and Stará Ľubovňa

The lowest share of positive test results was reported in the districts of Zvolen and Medzilaborce (0.28 percent each).

While after the first round there were 45 districts with a positive rate above 0.7 percent, only 15 were left after the second round. The worst situation is in the districts of Púchov (1.65 percent) and Stará Ľubovňa (1.3 percent), which are the only ones with the share of positive cases above 1 percent.

The highest turnout was in the Dunajská Streda district, nearly 90 percent. One of the reasons was probably the fact that people from the neighbouring districts (as it was the only one in south-western Slovakia where the testing took place) came to get tested. The lowest turnout was in the Stará Ľubovňa district.

Continue to be careful

It will take some time until it is possible to assess the impact of the whole project, said chief hygienist Ján Mikas. Still, he appreciated that due to the tests, the most infectious people were caught, so they prevented the massive spread of the disease.

“People should not become lazy and less careful, though,” Mikas said, stressing that it is still necessary to follow basic hygienic rules.